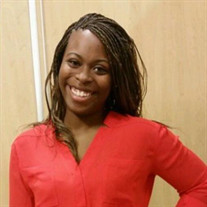 Zarinah Wafa Bin Zakiyyah El-Amin , 27, born in Austin Texas on February 7,1992, was the daughter of Craig and Wanda El-Amin. Zarinah made her transition to glory on September 1, 2019 in Mission Hills, California. She exuberated every aspect of the meaning of her name Fulfillment of a Promise; of God; The daughter of Zakiyyah;and The Trustworthy, respectfully. A beautifully, vibrant soul with the ability to brighten up any room; Zarinah loved to build meaningful friendships and unconditionally show support for her family, friends and community. At the tender age of ten she experienced her first triumph, in which she overcame treatment of a brain tumor attached to the stem of her brain; before it had the opportunity to become cancerous. She gained her strength, confidence, zeal and drive from such experiences and carried passions to overcome any obstacles. From a very young age, Zarinah excelled in coursework and exhibited affection for various sports including basketball, track and field, and volleyball. Mostly, her interests were concentrated in cheerleading and dancing; where she devoted her constructive down time to creative dance, hip-hop being her favorite form, and improving cheerleading goals. These affections enabled her attendance to Mccallum High School, in which participating in the fine arts academy and cheerleading molded her ambitions to fulfill her creative expressions through form of dance. While holding the title of Cheer Captain, she built relationships in which time was not a gauge of the magnitude of love and sincerity shared with her team. Upon graduation in 2010, she continued her education at several universities including: Austin Community College, Lamar University, and her personal favorite The University of Alabama. Although cheer was her intended avenue, while in Alabama she found her love and peace working for the service industry. Upon her return to Austin in 2012, she began employment at Dave and Busters and various restaurants simultaneously. Her journey of seven years enabled her to pursue travels while professionally training new hires around the United States and Canada. With her main responsibility of helping facilitate the smooth transitions of opening new stores and providing top quality service, the bonds formed with people from several different walks of life outshined all the trials and tribulations that arose. Zarinah adapted the montra Everybody Is Somebody and portrayed that throughout her interactions in Birmingham, Mcallen, Friendswood, El Paso, Houston, Oakville, New Orleans, Euless, Woodbridge, and NorthRidge amongst all other locations she had the opportunity to be apart of. She enjoyed music, dancing, traveling, supporting family and friends and more infectiously she loved to laugh. She will forever be remembered for her one-of-a kind phrases, kind heart, outgoing personality and the compassionate bonds she formed along her journey. She was predeceased by her grandmother Julia Dancy, and grandfathers Earl Slider and Curtis Dancy. She is survived by her grandmother, Earnestine Slider; mother, Wanda El-Amin; father, Craig El-Amin [Carolyn]; her brother, Corey Dancy; her brother, Jamal El-Amin; her sister, Nadiyah El-Amin; her significant other, Savion Woodley; and an abundance of nieces, nephews, aunts, uncles, and extended family members and friends who loved her spirit dearly.

Zarinah Wafa Bin Zakiyyah El-Amin , 27, born in Austin Texas on February 7,1992, was the daughter of Craig and Wanda El-Amin. Zarinah made her transition to glory on September 1, 2019 in Mission Hills, California. She exuberated every aspect... View Obituary & Service Information

The family of Zarinah Wafa Bin Zakiyyah El-Amin created this Life Tributes page to make it easy to share your memories.

Send flowers to the El-Amin family.