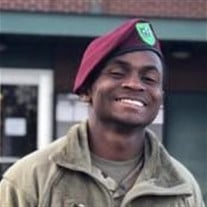 Private First Class (PFC) Zaesean RaeKwon Montreous Woodhouse, Austin Texas, passed away on January 10, 2020 in Colorado Springs, CO; at the young age of 19 years old. PFC Zaesean Woodhouse was born on May 4, 2000 in Austin, TX. In high school Zae joined the JROTC; that is when he knew he wanted to serve his country. While Zae was still in high school he passed his Armed Services Vocational Aptitude Battery (ASVAB) and was eager to join the armed forces. Zae enlisted in the U.S Army shortly after he graduated from high school in Round Rock, TX. While serving his country, Zae worked as a 92A (Automated Logistical Specialist) , he wanted to follow in his grandfather Larry Williams footsteps and become a Green Beret; so he became Airborne a short time after reaching his permanent duty station in Ft. Carson, Co. Zae, thought jumping out of plans would be fun. He was assigned to FSC 3rd Battalion 10th Special Forces Group (Airborne). PFC Zaesean Woodhouse is survived by his mother and father Tamica N. Furs and Frederick J. Woodhouse; his father's wife and bonus mother Kaywana L. Sparkman-Woodhouse and bonus father Richard Furs; his two brothers Jaeden and Paeden Woodhouse; his bonus brother Amarion Sparkman; his eternal brother Nik Parrish; his grandparents Joyce Williams (Larry Williams); Adrian Lee (Pat Lee); Annie Howe (Lester Howe); Eddie Woodhouse (Debrecca Woodhouse); his Godmother Magdelene Frederick and an endless list of family and friends. PFC Woodhouse was a loyal soldier who spoke about how he wanted to retire from the Army. In his short time on the Armed Forces, Zae oversaw the organizing and inventorying of his units shop stock listing. He loved jumping; he was the only soldier in his unit who tried to jump every parachute on an airborne operation; he was an absolute go-getter. Zae excelled in physical training (PT), when Zae’s unit competed in the incline, he would beat everyone in the platoon running and was always the first one to make it to the top; he was something like a PT stud. Outside of his military accomplishments, Zae was such a sweet soul. It was a joy just to be in his presence. From his contagious smile, goofy laugh, off beat dance moves and awesome conversations. Zae never met a stranger and tried to see the good in everyone. We will forever cherish the memories we shared. Son, you received your Army wings but now you have your Heavenly wings to carry you home. We will all be together again some day.

The family of Zaesean Woodhouse created this Life Tributes page to make it easy to share your memories.

Send flowers to the Woodhouse family.