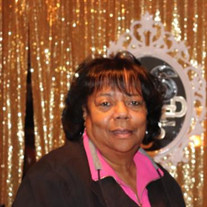 The ZOOM Virtual Memorial Service will be on Saturday, June 12, 2021 from 6:30 p.m. to 8:30 p.m. PST (California Time). WWW.ZOOM.COM – Meeting ID: 829 2191 9256: PASSCODE: 546303 Wyndolyn “Gwenn” Bowden was born on March 29, 1951 in De Kalb, Texas to the union of Myrtle Frances Walker Bowden and William Henry Bowden. She was the first of three children. The family moved to Austin, TX when Gwenn was three years old. Gwenn attended St. John Nursery which was owned by Lenora May. She attended Clarksville Elementary School which only had first through fourth grades. She then attended Blackshear Elementary School for the fifth and sixth grades. When Gwenn was entering the seventh grade, the school system had recently been integrated, so Gwenn attended O. Henry Middle School. Upon attending O. Henry Middle School, Gwenn decided she wanted to be called “Gwenn” instead of Wyndolyn. While at O. Henry Middle School, the family moved from the Clarksville community to east Austin, TX but Gwenn continued to attend O. Henry Middle School through ninth grade. She graduated from Albert Sidney Johnston High School in May 1969. The day after Gwenn graduated, she moved to Los Angeles to live with her aunt, Lola Faye Bowden Bolds, to continue her education in Business School. Shortly thereafter, Gwenn started working for Crocker Bank (currently Wells Fargo Bank) in the computer department of which she made a career of and retired after 35 plus years of service. Gwenn confessed her faith in Christ early on in life at Sweet Home Missionary Baptist Church located in the Clarksville community in Austin, Texas. In 1965, Gwenn joined Olivet Baptist Church under the pastoral leadership of Lawrence V. Wicks. After moving to Los Angeles, Gwenn attended First A.M.E. Church under the pastoral leadership of Dr. Cecil L. "Chip" Murray. Gwenn joined Word of Encouragement under the pastoral leadership of Najuma Smith-Pollard where she remained a loyal and dedicated member until God called her home. Gwenn loved doing activities with her son, Brandon, daughter, Myeisha, daughter-in-law, Deedra, grandchildren, family, and friends. She especially enjoyed the game LCR (left-center-right). Gwenn’s grandchildren affectionately called her HoneyBee of which she was adamant about being called. The name HoneyBee kind of stuck and almost everyone started calling her HoneyBee. She loved it. She even put the honey bee emoji on every text message she sent. She also put the sunflower (her mother’s favorite flower) emoji and the penguin (her favorite animal) emoji on every text message she sent. Gwenn loved going to the casino with her cousins, Gwen and Twyla Johnson, and Frances Davis. Gwenn enjoyed crossword search books, and watching her reality shows. She loved the Los Angeles Clippers NBA team. She was a borderline genius. Once she read anything, she would remember it verbatim. She had a unique trait for orderliness, perfectionism, and great attention to detail. If you could not remember a date, place or time of anything, Gwenn is the one that all the family members would go to. The memory she had was so amazing. She loved texting everyone to let them know of birthdays of family members and letting them know of things coming on television. She also loved sharing recipes from her mother’s handwritten cookbook. Gwenn was such a giving person. She was always concerned about the well-being of others. If you met Gwenn, you never would forget her, because no matter what was going on in her life, she always had a conversation and words of advice for you. Gwenn was firm in her faith and on Friday, April 30, 2021 at 8:55 p.m., she was called home to that wonderful place of eternal life. She was preceded in death by her parents; and niece, Kendra “Terri” Daniels. Left to cherish Gwenn’s wonderful memories is her son, Brandon William Charles Patterson (Deedra Eshawn) of Los Angeles, CA and daughter, Myeisha Lenae Nelson of Los Angeles, CA; two granddaughters: Destiney Victoria Gamboa and Bria Frances Josephine Patterson both of Los Angeles, CA; one grandson: Brandon William Charles Patterson II of Los Angeles, CA; two sisters: Dr. Glenda Bowden Daniels (Kenneth) of Arlington, TX and Debbie Bowden of Austin, TX; three nephews: Kenneth “Treis” Daniels (Carrie), Tony Daniels (Meredith), and Herschel Johnson (Ashley); two great-nephews: Kailand Johnson and Chancellor Drake; three great-nieces: Koi Johnson, Zoe Daniels and Natalie Daniels; five aunts: Lola Faye Bowden Bolds of Los Angeles, CA, Margie Walker of Texarkana, TX, Eyvonne Daniels (Charles) of DeKalb, TX, Carolyn Walker of Los Angeles, CA and Betty Walker of Little Elm, TX; one uncle: Thomas Walker of Austin, TX; like a son: Spencer Green; like a brother-in-law: Charles Brown; special cousins: Gwen Johnson, Twyla Johnson, Deyna Hearn, Rhonda Walker, Carl Franklin, and Barry Franklin; goddaughters: Pamela Bell Pearson and Shanda Johnson Frazier; best friends: Patricia Houston Bell and Sandra Kay Owens White; close friends: Lupe Hernandez, Karless Osby, Milo Russell and Alice Roland Brown; and a host of cousins and friends.

The family of Wyndolyn "Gwenn" Bowden created this Life Tributes page to make it easy to share your memories.

The ZOOM Virtual Memorial Service will be on Saturday, June 12,...

Send flowers to the Bowden family.