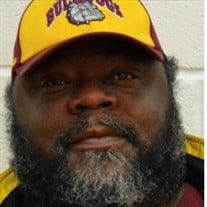 https://www.flipsnack.com/alcbf/willie-deary.html https://livestream.com/accounts/7325565/williedeary A GLIMPSE IN THE LIFE OF WILLIE RAY DEARY, JR. Willie Ray Deary Jr, 60, of Thorndale, TX went home to be with the Lord on February 11, 2021 at Scott & White Hospital in Round Rock, Texas. Willie, also known as Sugar Ray, was born on January 1, 1961 in Rockdale, Tx, to Willie Ray Deary Sr. and Mattie May (Williams) Deary. He attended Thorndale High School where he had many accomplishments in Track & Field as well as football which he loved. He continued his education and football career at Sul Ross University in Alpine, Tx. His love for sports continued through his life through watching both his son, daughter, and nephew play from Pop Warner through high school as well as tailgating, bar-b-queing, and College football Saturdays with his brother Joseph and family. Willie was an avid outdoors man who loved camping with his family no matter what nature threw at him. He also enjoyed deep sea fishing and fishing with his brothers. He loved animals and would watch countless documentaries because he just wanted to learn about them and because he just knew that Bigfoot was real. Willie loved to learn about different cultures and cuisine and was never afraid to try anything once. Willie also enjoyed taking trips and visiting various zoos, aquariums, as well as several theme parks with his wife and children. One of his favorite family vacations was the two-week trek to the Grand Canyon. During this trip he lost their car in the hotel parking lot believing it had been stolen. As much as he enjoyed this trip, he became so homesick and missed his grandmother so much he cut the trip short. Willie will always be remembered for his bigger than life personality, quirky nicknames for those he loved, quick wit, huge smile, and booming laughter. Willie is survived by his wife of 24 years Michelle and their three children Matthew, Meghan, and Natalie, his grandmother Odessa Williams of Thorndale, sister Loretta Deary-Mattocks (nephews Johnathan, DuBois & Ira), 3 brothers Harvey Deary (Sara) (niece Leeawna Deary), Joseph Deary Sr (La Nell) nephews Joe Jr, Joshua, and niece Madelyn, all of Thorndale, Bruce Deary (nephews Xzaviar, Jarell, Bruce Jr, nieces Juliette and Dynadia) of Killeen and Austin, his sister-n-law Danielle Dickmann (nephew Zackary) of Round Rock, and brother-in-law Shawn Dickmann of Austin. He also leaves behind his beloved Aunts, Uncles, Cousins and host a great nephews and nieces whom he loved dearly as well as adopted church family Betty R. Unnasch, Phillip Templain, and Linda Marek. Willie is proceeded in death by his Mother Mattie (Williams)Deary, Father Willie R. Deary Sr, sister Vanessa Deary, his grandfather Joe Williams Sr, and both paternal grandparents.

https://www.flipsnack.com/alcbf/willie-deary.html https://livestream.com/accounts/7325565/williedeary A GLIMPSE IN THE LIFE OF WILLIE RAY DEARY, JR. Willie Ray Deary Jr, 60, of Thorndale, TX went home to be with the Lord on February 11, 2021 at... View Obituary & Service Information

The family of Willie Ray Deary Jr. created this Life Tributes page to make it easy to share your memories.

Send flowers to the Deary family.