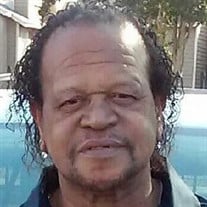 On 07/01/2017, Willie Ray Alexander was called home. “God was walking through his garden of precious flowers and picked one of the most beautiful ones out of the Alexander family”. Willie was a very caring person and gave his all to everyone that knew him. Willie was the cook for “everybody’s” party. He was known for his famous beans and brisket. Not only did he cook for you, he would come over and cut up all the meat for you. If he didn’t have anywhere to go, he would be your server. His faith was strong and loved the Lord. He served as a greeter who didn’t always attend meetings but once he walked in the door, he started his duties. He participated in the men’s choir and loved singing his solo, “Clean Up What I Messed Up”. He enjoyed his Pastor’s sermons and proudly relayed the message to his children if they missed church. Dallas Cowboys had a die-hard fan living on the northeast side of Austin, Texas who would defend Romo and all the other players to the end and didn’t mind arguing why. There were plenty of arguments from sons Ira, Dayonte (Raiders/Lions) and Ebony (Steelers). HA HA!!! He always got the last word. From getting whooping’s as a kid for running in the rain to helping Big Mama cook dinner by “Gathering Chickens”, Willie was a very adventurous man who wouldn’t even let his twin sister Julia Faye move to California by herself. He shared a unique bond with each one of his siblings. He was a work-a-holic who would go to work at MV Transportation, cooked BBQ on the side for various people weekly, drove limousines on weekends, did charity work for grandkids track club, and found time to go to bingo a couple days out of the week. If he knew it was your birthday, he would tell you to come play bingo for a penny. He went to the casinos in Louisiana and still found time to clean/fix all three of his Mercedes. He preceded in death by his parents Elmer Sr. and Joyce Alexander and his wife Cousandra Alexander. He leaves to cherish his four children; Dayonte, Derrick, Ebony and Ira (Cassandra). Five grandchildren: TyJ’Auna, Jalen, Anayah, Ayanna, Amor. He also leaves a longtime girlfriend, Stephanie Gleason and her three sons; Kalvin, Kenny and Kygel. Seven siblings: Brenda Doyle, Venesa Davis, Elmer Alexander Jr, Julia Alexander (Twin), Dorothy Alexander, Minnie Nixon and Wilford Alexander. He also leaves his loving Aunt Ruby Alexander and Uncle Curly Alexander (Shirley) and a host of special mothers, nieces, nephews, cousins and friends.

On 07/01/2017, Willie Ray Alexander was called home. &#8220;God was walking through his garden of precious flowers and picked one of the most beautiful ones out of the Alexander family&#8221;. Willie was a very caring person and gave his all... View Obituary & Service Information

The family of Willie Ray Alexander created this Life Tributes page to make it easy to share your memories.

Send flowers to the Alexander family.