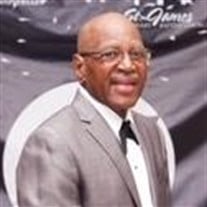 William Lee Madison, Jr. “Bill” was born August 27, 1944 in Louisville, Kentucky to William Lee Madison, Sr. and Oralene Madison. He was a member of Joshua Tabernacle Baptist Church in Louisville, where he was baptized at an early age. William, also known as “Skip,” “Bill,” “Doc,” graduated from Louisville Male High School in 1962, leaving a legacy as an outstanding football player. After graduating from high school, he proudly served his country when he joined the United States Air Force. He retired from the United States Air Force after 20 years of service. During this time, he married his high school sweetheart, the love of his life, Macie Lee Davis and to this union three children were born, Cynthia, William, III, and Micah. William “Bill” moved to Cedar Park, Texas after retiring from the Air Force and was employed with the United State Postal Service for 27 years. Bill and Macie joined St. James Missionary Baptist Church where he was ordained as a Deacon. Bill was a faithful member of the church, especially the Communications Ministry where he could be seen just about every Sunday morning working the camera. He was involved with the Angels at Your Service ministry and attended Bible Study Fellowship of Austin. His passion was photography and his work was well known around Austin and surrounding areas. Bill loved and supported his children in every sport and life decision and encouraged them to succeed in their endeavor. He also enjoyed spending time with his grandchildren, whom he loved and cherish dearly. Not only was Bill a father to three children and four grandchildren, he was a mentor and father figure to many. He was loved by many and he will be truly missed. Preceding him in death was his father, sister Evelyn King, brother George Madison, and daughter Cynthia Williams. He leaves to cherish his memories, his wife of 53 years, Macie, his mother Oralene Madison of Louisville, Kentucky; sons, William (Hala) of Pflugerville, Tx.; Micah (Ketura) of Mansfield, TX.; grandchildren, Khirah Madison of Florida, Miyah, Myles, and Malcolm Madison of Pflugerville, TX. He is also survived by his Goddaughter, Nicole Cummings of Kyle, TX.; Nephews, Dwayne Haun, Corey and Courtney Bankston, and Charles Anthony King; niece, Contessa King; sister-in-law Gloria Davis of Detroit; two adopted sons, Rance Simpson and Roderick Crenshaw; special friends, “The Four and No More,” Deacon Glenn and Navye Cummings, Rev. Franklin and Marilyn Taylor and Deacon Ray and Joyce Caldwell, and a host of relatives and friends.

The family of William Lee Madison Jr. created this Life Tributes page to make it easy to share your memories.

Send flowers to the Madison family.