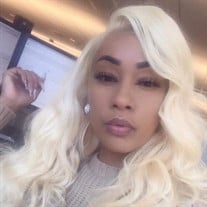 Whittney Judisha Wheeler was born on January 26, 1987 in Paducah, KY to Julie Ladonna Tyler and James Wheeler. On the evening of June 12, 2019, suddenly and unexpectedly, she was called home to be with the Lord at the age of 32 years old. Whittney grew up attending Burks Chapel AME Church in Paducah, KY where she accepted Christ at an early age and was a member of the youth choir. In her years here in Austin, Texas, Whittney attended St. James Missionary Baptist Church regular. Whittney moved to Texas in 1990 with mother and brother Quinn. During her preschool years, Whittney attended daycare at Ebenezer Baptist Church where she was loved by all. While in Texas she attended Austin ISD. She was a successful student at Graham Elementary, Dobie Middle School, and Lanier High School. In 2005, she earned her high school diploma from American Youth Works. Whittney began her career with Amica Insurance in 2012. While with the company she received many awards for Lead Handling and top sales congruence. Whittney was full of life with a contagious and friendly personality. She was bold, beautiful, and spontaneous while briefly on this earth. Her girls, Jordyn and Brooke were her world and it was nothing that she wouldn’t do for them to make them smile. She exposed both children to new adventures and travels during recent years which kept her going daily. Whittney was not only a devoted mother but she was a devoted daughter, sister, and best friend. The bond she shared with her mother, Julie, was one that was unbreakable. Julie states “she is my everything…. she is my only best friend…. we are connected in heart, mind, and soul.” Whittney’s relation with her brother Quinn is one that can’t be described. They were extremely close and each other’s biggest supporters through thick and thin. Whittney leaves in cherish her beautiful daughters Jordyn Danielle Moales and Brooke Christian Parr. Her mother, Julie Ladonna McClellan (Ronald McClellan), father Pastor James Wheeler, Sr., Brothers: Quinn Shumpert and James Wheeler, Jr., Sisters: Jaymi Wheeler, Latoya McClellan, Whitney Lee, and Jennifer McClellan, Nieces: Quiniyah Shumpert and Mariah Shumpert and Nephew: Dionte Warren, Aunts: Vickey Bolen and Cheryl Byrd and one Uncle: Jason Tyler. With a host of other aunts, uncles, cousins, and friends. Welcoming her into eternal life are her maternal grandparents Julius and Shirley Tyler as well as her sister Jessica Wheeler.

Whittney Judisha Wheeler was born on January 26, 1987 in Paducah, KY to Julie Ladonna Tyler and James Wheeler. On the evening of June 12, 2019, suddenly and unexpectedly, she was called home to be with the Lord at the age of 32 years old. Whittney... View Obituary & Service Information

The family of Whittney J. Wheeler created this Life Tributes page to make it easy to share your memories.

Send flowers to the Wheeler family.