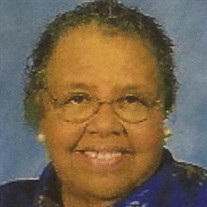 Vivian Alberta Lee Prosser was born February 12, 1922 in St. Mary Colony, Bastrop County, Texas to George Linsey and Ruby Everlee (Doyle) Prosser. She was the oldest of 6 children. She spent her formative years with her grandmother, Mary Ada 'Bom' (Overton) Doyle in St. Mary Colony while she attended public school. She was the oldest granddaughter of Justus and Mary Ada Doyle. She accepted Christ at an early age at St. Mary Baptist Church in St. Mary Colony. At St. Mary she was over the youth department where she directed Christmas, Easter, Mother’s Day, and Children' Day programs. In 1964 Vivian joined Corinth Baptist Church in Austin, Texas where she also worked with the youth and made choir robes for the young adult choir. She married James Caldwell Smith July 6, 1941 and to this union eight children were born. Vivian worked at Travis State School for several years and later was a homemaker. Vivian was a great seamstress. She made clothes for her daughters and the twins, Ken and Len. She taught her daughters to bake and sew at an early age. She was a great cook and prepared her Sunday cakes on Saturday and forbid anyone to cut them until Sunday dinner. Vivian enjoyed reading the newspaper, Word Search Puzzles, and Adult Coloring Books where she used her quilting skills to complete the designs which were simply beautiful. She loved attending gospel concerts and listening to quartet singers such as The Swan Silvertones, Archie Brownlee and The Blind Boys, The Soul Stirrers, Mighty Clouds of Joy, Gospel Keynotes, Canton Spirituals, Lee Williams and the Spiritual QC’s. Vivian especially loved seeing The Soul Savers of Austin who included three of her brothers and several cousins. Vivian was called to eternal rest on Friday evening, May 22, 2020. She was surrounded by her beloved children, grandchildren, and other family members. She was proceeded in death by her parents, her husband of 56 years on March 1, 1998; two sons: James Douglas ‘Doug’ Smith and Horace Curtis ‘Boo’ Smith; four brothers: George Otis ‘June’, Rwyne B. ‘Wyne’, Howard ‘Newt,’ and Harvey Luster ‘Luck’ Prosser; two grandchildren: Deric Mayse and Deirdre Lynn Smith; and one great-great grandchild Mia Nefetari Ma’at Pilot. She leaves to cherish her memory, six children, Edwin (Claudette) Smith and Andrew (Valdalyn) Smith of Houston, Carroll (Thomas) Mayse of Temple, Deborah Davis and Kinnard (Brenda) Smith of Austin and, Leonard (Mae) Smith of Taylor; one brother, Sylvester Prosser 'Jut' of Austin; 29 grandchildren, 65 great grandchildren and 10 great-great grandchildren and a host of nieces, nephews, cousins and friends. https://livestream.com/accounts/7325565/viviansmith

Vivian Alberta Lee Prosser was born February 12, 1922 in St. Mary Colony, Bastrop County, Texas to George Linsey and Ruby Everlee (Doyle) Prosser. She was the oldest of 6 children. She spent her formative years with her... View Obituary & Service Information

The family of Vivian Alberta Lee Smith created this Life Tributes page to make it easy to share your memories.