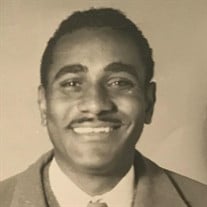 On June 30, 1924 Bernice Smith Coleman and Herbert Coleman welcomed Vernon Coleman into the world in Galveston, Texas. Bro. Coleman grew and matriculated under the watchful eyes of his parents, his grandmother, Ada Smith, and his uncle “Midget”. After graduating from Central High School in Galveston, Bro. Coleman decided to seek the bright lights and faster pace of New York City. While working as a courier in Time Square, Bro. Coleman was not completely out of sight of his Uncle Wille and Aunt Beatrice Kelsey. Shortly after arrival in New York City, Bro. Coleman was drafted into the United States Navy, and served as a Seaman First Class in the South Pacific during World War II. After discharge from service following the war in 1946, Bro. Coleman took advantage of the GI Bill, and began his college studies at Langston University, in Langston, Oklahoma; later transferring to complete his education at Prairie View A & M University, in Prairie View, Texas. Shortly after graduating from Prairie View with a Bachelor of Science Degree in Industrial Education, and a master’s degree in Education, Bro. Coleman accepted his first teaching assignment in the Greenville Independent School District, in Greenville, Texas. After teaching in Greenville for a few years, Bro. Coleman accepted his next teaching assignment in LaMarque, Texas; culminating his 33 years of teaching, and coaching football, basketball, and track in the Austin Independent School District at Kealing Junior High and Pearce Junior High schools. As a highly skilled swimmer, trained in the Gulf of Mexico in Galveston, Bro. Coleman taught and protected many of Austin’s young swimmers as a summer lifeguard at a few Austin Parks and Recreation Swimming Pools. While matriculating at Prairie View, Bro. Coleman met the love of his life, Vina M. Harvey; whom he married on July 20, 1950. Their 68-year union produced one daughter, Vernie Renae Coleman Daniels, MS, RPh, her husband of 36 years, Dr. Dennis E. Daniels; their three sons, Dr. Dennis E. N. Daniels, Jr., Bryant Coleman Matthew Daniels, JD, and Colin Phillip Daniels, BA, MA. Bro. Coleman’s oldest grandson, Dr. Dennis Daniels, Jr. and his wife Apryl are parents of Bro. Coleman’s first great grandson, Dennis E. N. Daniels, III. Over the years, Bro. Coleman’s family continued to grow by the addition of siblings from his parents’ later marriages, sisters- and brothers-in-law, nieces, nephews, cousins, and a host of long-time friends from his church and community. After retirement, Bro. Coleman continued to volunteer and serve his community. He and Vina served for many years as volunteers at the Austin Baptist Chapel Soup Kitchen for the homeless; Austin Baptist Association office and could be found on many occasions transporting college students to / from church, and to their home for home cooked meals. Bro. Coleman accepted Christ as his personal savior, loved the Lord, and was a faithful member of the Ebenezer Baptist Church for over 50 years. Bro. Coleman loved music and shared his gifts of playing guitar, bass guitar, singing in the Sanctuary Choir and Men’s Chorus, and leading the Men’s Chorus nursing home outreach ministry, until his health failed. In the last days of Bro. Coleman’s battle with cancer, he could be found quoting scriptures with his wife, praying with his son-in-law and grandchildren, looking at videos of his great-grandson, and singing songs of praise with his daughter. Despite his pain and suffering, Bro. Coleman found comfort in the Lord, and the limitless love shared by family, and friends.

On June 30, 1924 Bernice Smith Coleman and Herbert Coleman welcomed Vernon Coleman into the world in Galveston, Texas. Bro. Coleman grew and matriculated under the watchful eyes of his parents, his grandmother, Ada Smith, and his uncle &#8220;Midget&#8221;.... View Obituary & Service Information

The family of Vernon Coleman created this Life Tributes page to make it easy to share your memories.

Send flowers to the Coleman family.