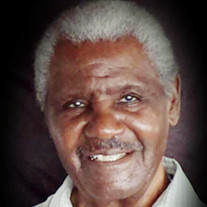 Thomas Hines Washington passed away peacefully at home in Austin, Texas on June 15, 2019, at the age of 95. Born to Jesse and Ollie Washington on May 16, 1924, he was the third child, first-born son and one of twelve siblings. The family moved from Okechobee, Florida to Brooksville in 1928 where he was baptized at Bethlehem Progressive Baptist Church, and attended Mobly Elementary School and Moton High School. In April of 1943, Tom enlisted in the United States Army. He went to basic training in Camp Butner, N.C. and then to Camp Shank, N.Y. for additional training. While on leave visiting his sister in N.J., he met the love of his life, Bertha Adams, and they began their courtship through writing letters. In November of 1944 he shipped out with the 1325th Engineering Regiment to France, England and Germany as part of the Rhineland Campaign. He was a demolition and mine sweeping expert, machine gunner and sharpshooter. In August of 1945 he was sent to Guam and Hawaii in the Pacific Theatre, where one duty was to guard Japanese prisoners of war. He was discharged on February 27, 1946 and returned to N.J. to marry Bertha on February 23, 1947. Thomas and Bertha settled in Piscataway, N.J., where they raised three children and shared 71 glorious years together. He lived his life devoted to Christ and the church. A man of principle, fortitude, obedience, humility, conviction and compassion, he believed the most important things in life were faith, family and friends. Thomas was ordained as a Deacon in 1960 at Ebenezer Baptist Church in New Brunswick, New Jersey. He continued to serve as Deacon at Mt. Moriah Missionary Baptist Church in Ocala, Fl. and at Ebenezer Third Baptist Church in Austin, Texas. He served the church in many other capacities during his lifetime, including Sunday School Superintendent and teacher, Senior Choir President, church sexton and advisor on the Pastoral Search Committee. Each Sunday after church, he and the family would visit the sick and shut-in offering prayer and fellowship, as well as bringing communion on first Sundays. He loved entertaining, hosting church events and picnics, gardening, playing dominoes, traveling to the Bahamas, Jamaica and throughout the U.S., and enjoyed many Broadway performances in New York City. He was employed by Beecham Pharmaceuticals in New Brunswick, New Jersey as a lab technician and chemical operator until his retirement in 1986. Retiring to Ocala, Florida in 1987, he continued to enjoy gardening, dominoes, cooking, entertaining and traveling. He and Bertha participated in Tai Chi for Seniors and loved their walks and bike riding through the community. He is preceded in death by his loving wife Bertha; parents Jesse and Ollie Washington; sisters Mary Johnson, Henrietta Langley, Lenora Washington, Estelle Wilkerson, Elmira Washington Blount and Margaret Washington Brooks and brothers Mack Washington, Jesse Washington, Jr. and Walter Washington. He leaves to mourn and cherish his memories his children Thomas Washington, Jr. (Barbara Sweet Washington) of Azusa, California, Cheryl Washington (Hon. Jerald Carter) of West Orange, New Jersey and Alan Washington (Linda Marie Washington) of Austin, Texas; granddaughters Amber Carter of West Orange, New Jersey and Sydney Sweet Washington of Azusa, California, and a host of cousins, nieces, nephews and friends across the country. A memorial service will be held at 11:00 a.m. Tuesday, June 25, 2019 at Ebenezer Third Baptist Church, 1010 East 10th Street, Austin, Texas with Pastor Ricky Freeman officiating. Funeral services will be held at Mt. Moriah Missionary Baptist Church, 55 SW 3rd Ave., Ocala, Florida on July 6, 2019, with Rev. Dr. Lorenzo S. Edwards officiating. Visitation at 10:00 a.m. in the sanctuary, service at 11:00 a.m. and graveside service to follow. The family is grateful to Hospice Austin for their compassionate care and support. Donations in his memory may be made to www.hospiceaustin.org , General Program Services. “He shall call upon me, and I will answer him: I will be with him in trouble; I will deliver him, and honour him.” Psalm 91:15

Thomas Hines Washington passed away peacefully at home in Austin, Texas on June 15, 2019, at the age of 95. Born to Jesse and Ollie Washington on May 16, 1924, he was the third child, first-born son and one of twelve siblings. The family moved... View Obituary & Service Information

The family of Thomas Washington created this Life Tributes page to make it easy to share your memories.

Thomas Hines Washington passed away peacefully at home in Austin,...

Send flowers to the Washington family.