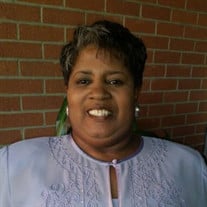 Theresa Victoria Hatcher Littlejohn Theresa Litttlejohn was born July 8, 1960 in Easton, MD. She departed this life on January 3rd, 2020 peacefully at GreenView Manor Nursing Home in Waco, Texas. Theresa confessed her life to Christ at an early age and attended Marlboro Heights Missionary Baptist Church under the leadership of Dr. R.A. Abercrombie for many years. Theresa joined Mt. Sinai Missionary Baptist Church June 1993 under the leadership of AW Anthony Mays and was a faithful member to the very end. Theresa graduated from Killeen High School in the class of ‘78 and later went on to attain her Associates degree from Central Texas College. Theresa went on to work as a teacher’s aide for Killeen Independent School District until moving to Austin in 1993 where she worked for over 24 yrs at TNRCC(TCEQ) until she retired. Theresa’s had a strong passion for music and played for several different groups while being a staff musician at Mt. Sinai including Women of Worship, Church Choir, Selah Choir, and her precious Lambs. In the many years of being a faithful member at the Mount, Theresa was given the nickname “chicken Wang” due to her love of chicken wings. Theresa kept her hair done and before falling ill she single handed brought back the popularity of her famous “French Roll” hairstyle. Many people may not have known but Theresa was known for her delicious cheesecakes as they were often requested for every family gathering. Her cheesecakes were the best and if you didn’t believe her, she would happily make you one to prove her point. Theresa had special love for her family and held a special place in her heart for her grandchildren. Theresa enjoyed crossword puzzles; practicing music and spending time with her family and friends. Upon first meeting her, anyone would tell you that she had an infectious smile and the personality to match. Theresa Littlejohn was an awesome mother; sister; daughter; grandmother; and friend. She will be missed beyond measure but she finally got her wings and has joined her parents Reuben and Catherine Hatcher as well as her three brothers Wayne, Keith, and Mark Blake, who all preceded her in death. Theresa leaves to cherish her memory: 2 children, Chauntylle McFadden (Dwayne) and Michael Littlejohn of Killeen, TX; brother, Curtis Hatcher(Regina) Saginaw,TX; 1 Aunt- Virginia Davidson-Thomas(William) Raleigh, NC; 1 Uncle-Charles Davidson,Columbus, GA; 6 granchildren, Bre"Yanna, De'Ja, Anecia, Aaliyah, Lauryn and Mi'Kaela all of Killeen,TX; host of nieces, nephews, cousins, and friends.

The family of Theresa Victoria Littlejohn created this Life Tributes page to make it easy to share your memories.

Send flowers to the Littlejohn family.