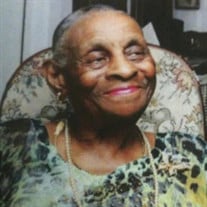 On May 29, 1920, Thelma Louise Arnold was born to Thomas and Nellie Eliza Jane Hill Arnold in Cottonwood, Texas. At an early age of 8 years old, her two sibling and a cousin were raised by their maternal grandparents, Charles Ned Hill alongside of her mother Nellie. For most of her adolescent years she grew up in her grandparents’ home with her older sister Oliva and her young sister Mary. She was sport oriented, strong willed, brilliant. In her younger years she accepted Jesus Christ as her lord and savior at the St. John’s Baptist Church. She finished her formal education in St. John Colony which then led Thelma was an inquisitive and wise child beyond her years which led her to her pursuit in higher education. In her thirst for education, she went to Prairie View A&M she obtain an education in Home Economics. From that she learned the essential skills to plan exquisite meals while also studying how to maintain a kept home. After graduating from Prairie View A&M University and working as a domestic household worker, at 19 years old, she met Hiawatha T. Franks in the Dell Community. On October 14th, 1940 they were blissfully wedded in St. John Colony in which to this union 10 children were born. Thelma and Hiawatha were blessed with Gwendolyn Faye (deceased), Paul Wesley (deceased), Hiawatha Clynch, Estella Louise, Deborah Bethune, Nellie Truly, Jett Morris, Charles B., Simone Janice, Lora Loretta. As she later became known to her children, grandchildren, other family and community members as Mama Franks, she instilled value of faith and education amongst all of those she knew. Thelma was most proud of all of her children as each of them achieved education while maintaining their faith in the lord. During her marriage to Hiawatha, she served alongside him as the First lady of the United Methodist Church for 38 years throughout the Region of the Southwest Texas Conference. Thelma was a devoted community activist, a mother of many, and a faithful member of the Methodist Church. As Hiawatha maintained the land by farming. Thelma worked in and out of the house cooking, baking and tending to the need of her children. In the 60 years that they were married, Thelma and Hiawatha encouraged their children and members of their church to maintain a strong work ethic. Mama Franks and her beloved teammate, Reverend Hiawatha Truly (HT) were a dynamic duo who changed the world for the good as Christ had commanded with each and everyone of us. Their beautiful union encompassed and enduring faith in God to fulfill and all of their needs. In her later years, she remained active in the Dell Corinth Church for more than 30 years both serving a First Lady and a member. She will be forever remembered as an advocate for education, faith and self-efficacy. Preceding her in death are her parents Thomas and Nellie Eliza Jane Hill Arnold, her late husband Hiawatha T. Franks, sister Olivia A. Roland and Mary Lee Franks, daughter Gwendolyn Faye McDonald, son Paul Wesley Franks, paternal grandparents Thornton Arnold and Sarah Walker Arnold and granddaughter, Stephanie Heiskell. As a loving mother, grandmother, sister, and friend, Thelma is survived by her children, Hiawatha F ranks (Dolores); daughter, Estella Elam (Marvin); daughter, Deborah Scott (James); Truly Heiskell; son, Jett Franks; son, Charles Franks (Doris); daughter, Simon Aiken (Chris); daughter, Lora Hardway (Lawrence), and countless grandchildren, great-grandchildren, nieces, nephews, cousins and friends. The joy and guidance that she brought to each individual she encountered will forever be cherished and highlighted as her legacy will continue on for many more years to come.

On May 29, 1920, Thelma Louise Arnold was born to Thomas and Nellie Eliza Jane Hill Arnold in Cottonwood, Texas. At an early age of 8 years old, her two sibling and a cousin were raised by their maternal grandparents, Charles Ned Hill alongside... View Obituary & Service Information

The family of Thelma Louise (Mama Franks) Franks created this Life Tributes page to make it easy to share your memories.

Send flowers to the Franks family.