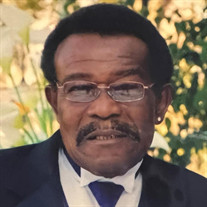 https://vimeo.com/696565784 https://www.flipsnack.com/alcbf/sylvester-campbell.html Sylvester "Sly" Campbell, of Austin, Texas, was born on June 1, 1941 to the late Sam and Lucille Campbell, in Richmond, Virginia. He was the eldest of four children. He completed his earthly journey on Thursday; March 31, 2022 at 9:45 p.m. He was preceded in death by his parents, Sam and Lucille, his son Tryson Campbell, his grandson, Lamar Campbell, and his brother, William Campbell (Lucy). He was educated in Chesterfield County. He professed his faith in Christ at an early age. He joined the Masonic Lodge in 1978 and was a member of the ED Jones Lodge #324. He also joined the Moco Temple #7 in 1981 and was a Shriner, all in Richmond VA. He was a current member of The Love Center Church. He had a strong work ethic and was determined to succeed. He started his own landscaping business and was very successful. He loved music, cars, motorcycles, and sitting around reminiscing with the family. He later moved to Texas where he worked as a school bus driver and also worked on cars. He was a good mechanic. He liked riding his motorcycles, racing cars, and playing his guitar with his band mates. He leaves to cherish his memories his Wife Shirley Campbell of 47 years; his Children, Angela McClain (Stanley), Sylvester Campbell Jr., Diane Johnson, LaTosha Walker (Daniel), Shemeka Clark (Sidney); Grandchildren, Samarra Rogers (Bryan), Dejohnette, Tiffany Young, Sylvester Campbell III (Kiara), Tameka Young, Dominique Campbell, Xavier Earls, Danique Alcocer (Jacob), Delyshia Johnson, Isaiah McClain, Shalyce Joiner, Savion Clark; Great Grandchildren, Ethan Rogers, Elias Rogers, Evan Rogers, Ezra Rogers, and Kalilah Campbell; Siblings, Percy Campbell (Mary), Shelia Campbell; and a host of nieces, nephews, cousins, and friends.

https://vimeo.com/696565784 https://www.flipsnack.com/alcbf/sylvester-campbell.html Sylvester "Sly" Campbell, of Austin, Texas, was born on June 1, 1941 to the late Sam and Lucille Campbell, in Richmond, Virginia. He was the eldest of four... View Obituary & Service Information

The family of Sylvester Campbell created this Life Tributes page to make it easy to share your memories.

Send flowers to the Campbell family.