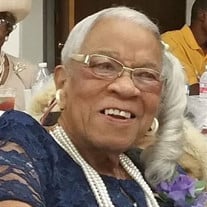 Susie E. Sansom-Piper August 23,1921- October 21,2019 Susie E. Moultry Sansom-Piper, the only child of the late Julius W. “Bose” Moultry and Eula Bell Crayton Moultry, was born in Milam County, Rockdale, Tx. on August 23,1921. Her mother, Eula Bell Crayton Moultry, the first Black Nurse in Milam County, was the daughter of a mulatto subsistence farmer, one who existed solely on the products of his land, as well as sold to others. Her father, Bose, was the son of the first Blacksmith in Texas, Paul Moultry, was a renowned blacksmith, and a World War I veteran. As an only child, Susie grew up close to her many Crayton-Gipson and Moultry first cousins, whom she regarded as siblings. Mrs. Sansom-Piper attended Aycock High School and graduated in 1937 as a salutatorian of her class. She received an Associate’s Degree in Business Administration, graduating with honors, from St. Phillips Junior College, San Antonio, Texas in 1940. In 1946, she graduated Magna Cum Laude from Samuel Huston College (now Huston-Tillotson University), Austin, Texas, receiving a Bachelor of Science Degree in Business Administration. A Master’s Degree was conferred with honors from Prairie View A&M College in Administration and Elementary Education in 1956 along with a Counselor Certification and additional studies under the National Science Foundation Program in Science and Mathematics. Susie was formerly married to the late Emzy James Sansom in 1940. To this union, two daughters, Barbara Sue Sansom Holsome and the late Eula Ammie Sansom Hebert, were born. After his death, she married the late Rev. John A. Piper. After the death of Eula, she raised two of her five grandchildren, as her own (Tamara and Emzy Jerome). Years later, she once again stepped in and helped to raise her great-grand Brittany who spent much of her time with Ma-Ma while her mother worked, and one great-great, Kianna. Her teaching career began and extended entirely in the Rockdale Public School System at Aycock High School. She started in 1943-44 when a replacement teacher was needed for grades three through five and music. For 23 years, she served in various capacities teaching grades three through eight; high school, science, social studies, business education, and music. She also assisted in the educational testing program and served as bookkeeper-secretary for many years. Through her teaching, manifested by patience and kindness, many students were district and state winners in University Interscholastic League events. After integration of the high school department in 1965, she was elected as the final Principal or head teacher of Aycock, and was assigned the task of “bridging the gap” for successful integration. During the 1966-67 next school term, Mrs. Piper was transferred to the Rockdale Junior High as teacher of 7th grade reading mathematics. Two years later, she was assigned to teach Texas History, the position she held for the next 15 years. In addition, to a 41- year teaching career, she found time to give back to her community and church. She served as a bonus Mother to many, many, people, giving advice and a listening ear whenever needed. She was an avid reader, writer, seamstress, and poet. She also crocheted and painted. She contributed to the lives of countless others. A prolific writer, she has featured such writings as Way Back When, Ebony Etchings, Just Folks, From Valleys to Mountains and numerous articles. Her writings included 42 years of newspaper features in the Rockdale Reporter, writing and editing numerous church bulletins, and newsletters. She was passionate about inspiring others and sharing history. She worked tirelessly to educate others about the great contributions our people have made to society, and to know of the great and noteworthy Milam County citizens. After her retirement, she visited Austin Area Schools to present her Way Back When series on life in the past. continued to write, speak at selected engagements, create beautiful arts and crafts, and play for her St. James Goldennaires church choir until the age of 97 ½. Prior to her death, at the age of 98, she published When a Loved One Dies, with her grand-daughter Tamara and began the last phase of her legacy work Seventeen Years in the Black Room. Mother Piper won numerous awards, certificates, and honors for her works over the many decades. She always said “There is something worthwhile in everyone, that no one has to fail if he or she will only believe in themselves” AND “make an effort to bring out the good that is within everyone you meet”. Mama believed that all of us were blessed by God with God given talents. If we don’t use it, we lost it. She used all of hers and was constantly blessed with more. She also stressed her blackboard rules to anyone she came in contact with: “Rut Hog or Die Poor Pig” Nothing from Nothing Leaves Nothing- You do nothing you get nothing It’s a Poor Dog That Won’t Wag His Own Tail If You Are Pushed Down in one Place- Pop Up Somewhere Else She was a member of the following: • The Order Eastern Star Chapter Ledbetter #177 • Afro -American Historical Society of Texas • W.H. Passon Historical Society • Texas Retired Teacher Association • National Association for the Advancement of Colored People (NAACP) • Ministers Wives Association Mama Susie leaves to mourn her daughter Barbara S. Holsome (Welton Sr.); grand-daughter/daughter Tamara Powell (Marcus); grand-children Cynthia Scott (Jerome); Welton Holsome Jr.; Anthony Holsome; one great-grandaughter Brittany Norris, and two great-great grand-daughters Kianna and Brianna. She also leaves her oldest remaining brother/1st cousin Howard Locklin and a host of other close cousins. Special family additions Eartha Colson, Levaughn Patrick, Rev. Johnny and Leitha Lewis, Arnetta White, her St James church family and many other dear, community members, students, and friends. She was preceded in death by her parents Eula and Bose Moultry, husband E.J. Sansom, daughter Eula Hebert, husband Rev. J. A. Piper, and grandson Emzy Jerome Hebert.

The family of Susie Emma Sansom-Piper created this Life Tributes page to make it easy to share your memories.

Send flowers to the Sansom-Piper family.