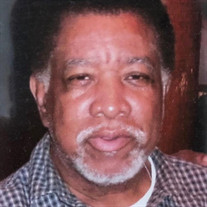 Steve Marvin Bolden Sunrise—May 11, 1941 Sunset—March 15, 2021 OBITUARY https://www.flipsnack.com/alcbf/steve-bolden.html Steve Marvin Bolden, known as: Daddy, Pawpaw, Pops, Steve, Uncle Steve, and “Uncle Piggy”, at the age of 79, passed away peacefully in his sleep at St. David Hospital in Austin, TX, on Monday, March 15th, 2021, around 6:00 p.m. He fought a good fight, he finished his race, he kept the faith; and now has been received unto his Lord and Savior, Jesus Christ, in His Heavenly Kingdom. (2 Timothy 4: 6 – 7). Now, let the church rejoice and say, Amen! Steve Bolden was born, May 11, 1941, in Austin, TX, to the parents of Richard and Gertrude Bolden. He was the youngest of six children and was raised in the old Clarksville Community in West Austin. Having been raised in a Christian home, Steve professed a faith in Jesus Christ and was baptized at an early age at Sweet Home Missionary Baptist Church. Attending and working in the church regularly was very much part of his life since his father, Richard Bolden, Sr., was a deacon of the church and his mother, Gertrude Bolden, was the church musician and BTU/VBS Co- Coordinator. Steve finished school at the old L. C. Anderson High School in 1961. He started his work career working for The City of Austin and The Austin Independent School District where he worked for 30 years. He also worked for the University of Texas for 10 years. Steve always looked for new opportunities to increase his income. He owned and operated several businesses as well. They included: STEVES JANITORIAL SERVICE, BOLDEN’S DAYCARE, and co-owner of IMOGENE’S BEAUTY SALON. During his later years, he found himself being a foster parent for 10 plus years and owned many rental properties. Steve was always a hard worker and possessed an entrepreneurial spirit to venture in the business world. Steve met the love of his life, Imogene Sterling, at Kealing Junior High School. They were united in holy matrimony in 1961 and have been married for 60 years. To this union, they were blessed with five children: Steve, Jr.; Margaret; Rhonda; Michael, and Sonya. He had a great love for God, his wife, and his children which was evident to anyone who knew him. And he had a passion for racing cars. One of his favorites was a 1950 Chevy Bel-air which he had detailed completely in a bright purple color. Another passion of Steve’s was his “Dallas Cowboys Football Team.” Win or lose, he remained a true fan of “The Boys.” Steve was proceeded in death by is parents, Richard, Sr., and Gertrude Bolden; his brothers: Frank, Willie, and Richard, Jr.; and his sister, Geraldine (Buford); and grandson, Michael Dunn, Jr. He leaves to cherish his memories his wife, Imogene Bolden; his sister, Gertrude (Owens); sisters-in-law: Janell Sterling, Jean Sterling, Lillie Bolden, and Mittie Bolden; five children: Steve, Jr., Margaret (LC), Rhonda (Donald), Michael, (Darlene), Sonya; 18 grandchildren, 30 great-grandchildren, and a host of nieces, nephews, relatives, and beloved friends. Now, let the church say, AMEN!

The family of Steve Bolden created this Life Tributes page to make it easy to share your memories.

Send flowers to the Bolden family.