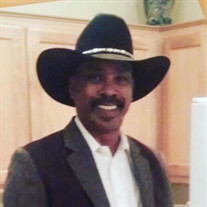 https://livestream.com/accounts/7325565/stanleycollins https://www.flipsnack.com/alcbf/stanley-collins.html Stanley B. Collins, was born January 19, 1953 in Austin Texas, to the Late Floyd B. Collins and Gertrude Brooks. Stanley attended Old Austin High then entered the Army from September of 1979 to July of 1983 in Fort Knox, Kentucky. Later returned to Austin then moved to San Antonio and ended his journey in Boerne, Texas working for a beautiful company for 10 plus years named Fidelitas were they treated him like family. Stanley never met a stranger. He would give you the shirt off his back no matter who you were. He was always the center of attention with his funny personality and his good looks. His most important role in his life was being a father and a grandfather. He loved his cowboy attire. We often said he was a cowboy that traded his horse for a fast car. He was more than a father to his children he was their friend and confidant. Stanley was preceded in death by parents Floyd Collins and Gertrude Brooks, his stepfather Willie Brooks and one stepsister Doris Alexander. He leaves his legacy to his children Derrick Collins, Tambra (James) Rogers, Aundoy Thomas, Darvis (Blythe) Marshall, Brodrick Marshall, Regina Alexander and Gregory (Shirley) Collins. His grandchildren Derrick Collins Jr., Joshua Collins, Elijah-James Rogers (Slim), Zion Rogers (Zioneta), Braylon Thomas, Aundoy Thomas, Aundoy Thomas Jr., Lewis Thomas, Kayla Polk, Taya Polk, Joshua Alexander, Jalen Highsmith, J’shon Leger, Jeremy Hodge, Lailah Collins, Amani Collins, Shaun Marshall and Brayden Marshall. One sister Engritt Brooks, three brothers Andre Collins, Floyd Collins Jr. and Willie Earl Brooks. His niece Toshanique Brooks and Nephew Tarron Brooks.

The family of Stanley Collins created this Life Tributes page to make it easy to share your memories.