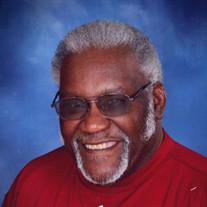 Sherman Harold Coleman, Jr., the only child of Sarah Etta (Johnson) Coleman and Sherman Harold Coleman, Sr. was born on November 2, 1952 in Austin, Texas. He graduated from L.C. Anderson High School. A few months later he entered the U. S. Navy where he served from 1971 - 1975. After an honorable discharge, he attended classes at Huston-Tillotson College, currently known as Huston-Tillotson University. Sherman married Ruby Lee Sorrells. To this union one child was born, Tanya Coleman. Several years later he married Brenda Sanders, and to this union no children were born. Sherman’s great love, other than his daughter, was his involvement with Miracles and Solutions, a substance abuse treatment program. As a recovering addict, he understood what the people he helped was going through. As a Sponsor, Sherman provided support to those struggling with addiction who could not stop on their own. He was available 24/7 to those who needed him—always ready with words of encouragement. Sherman also had an artistic side. From a young child he loved drawing and often thought of becoming a cartoon illustrator. He also taught himself to play bass guitar and enjoyed entertaining his friends and family. On Saturday, February 8, 2020 at 9:52 a.m., Sherman departed this life at St. David’s Hospital in Austin, Texas. He was preceded in death by his parents, Sarah Etta Johnson Coleman and Sherman Harold Coleman, Sr. Sherman leaves to cherish his memory his daughter, Tanya Coleman; a sister, Barbara Hicks Coursey, both of Austin, Texas; two grandchildren, Kiara Coleman of Dallas, Texas and Roland Ware, Jr. of Austin, Texas; and a host of nieces, nephews, relatives and friends.

The family of SHERMAN HAROLD (TANK HEAD) COLEMAN JR created this Life Tributes page to make it easy to share your memories.

Send flowers to the COLEMAN family.