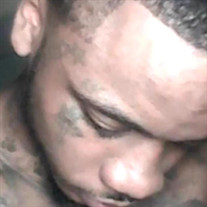 Shawn Thomas King, Jr., son of Monica M. King and Shawn King, he was born in Austin, Texas on October 17, 1993. He attended public school in Austin, TX at Zavala elementary School. Later relocated to Killeen, TX where Shawn attended Palo Alto Middle School. His eyes lit up and his journey in Basketball and Football became his passion. Going to Ellison High School was only played football, the following year he attended Shoemaker High, he only played Basketball. He truly enjoyed sports. When he didn’t have a ball in his hands, he was a comedian to us and all that knew him, he shared his gifts of laughter with all that came in contact with him. His charm and smile would enlighten any given moment, just like his love for his family. He had a huge heart. His uniqueness was different and one of a kind. His legacy will live on in the hearts of everyone he interacted with as well as those he reached but never met. On June 6, 2020, Shawn Thomas King, Jr.; The Lord called him home. He may be gone, but he will never be forgotten. He never asked to be a star because stars fall. He rise. He certainly did..... Our Star Bright. Shawn leaves to cherish his memory, his loving devoted Mother, Monica his father Shawn, One sister Brionna, One brother DeVaughn, Two Nieces Analaya and Melliana, Grandmother Josephine Williams, Great Grandmother Rosie Mae Davis, Aunt DeAnna ( Corey), Uncle Michael and a host of loving family & friends and to name numerous relatives.

The family of SHAWN KING JR created this Life Tributes page to make it easy to share your memories.

Send flowers to the KING family.