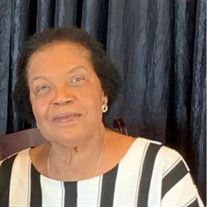 https://www.flipsnack.com/alcbf/sandra-brown.html On January 7, 2021, Mrs. Sandra Brown ended her earthly journey to reside in her heavenly home. On June 2,1945, Sandra was born in Bastrop, Texas, to the parents of Cedell and Magnolia (Trigg) Robinson. She was the fifth child of a family of twelve children. With three girls and eight boys for siblings, she learned at an early age the importance of “standing your ground.” Sandra Robinson graduated from Emile High School of Bastrop in 1964 and from Huston-Tillotson University of Austin in 1967, earning a bachelor’s degree in education. While attending college, she was the first African American to work as a sales representative in downtown Austin. Sandra joined Lee Boyd Brown, Jr. in holy matrimony on June 8, 1968. They were a loving couple and enjoyed a wonderful life together from that time until she passed away after a short illness. They added one devoted son, Lee Boyd Brown, III, to their happy union to join her adored step-son, Michael Brown, who was already a part of the family. Sandra began her teaching career at Georgetown High School in Georgetown and later taught English and social studies in the Austin Independent School District until her retirement in June, 2004. She was an excellent teacher, effective in having her students demonstrate learning at very high levels. While writing is a challenge for many students, Mrs. Brown was able to effectively model for students how to master this difficult skill. When not working with the students that she thoroughly enjoyed, she loved traveling abroad. She was an avid reader and loved to read everything and anything--that was her way to travel without leaving home. She became a dedicated runner and jogger. She and her husband, Lee Boyd, shared many mornings participating in these exercise activities. When jogging became challenging, they continued the routine as walkers. Sandra was a proud woman who earned the greatest respect from all whom she met. She was a beautiful, devoted and loving wife, mother, and grandmother. One of her greatest passions was watching her children and grandchildren grow into strong, God-fearing individuals. Throughout the years she remained a dutiful church member and churchgoer. She was dedicated to church and Enjoyed being in the house of the Lord. She loved the Lord and was a child of the King, embracing every scripture of the Bible as her guide through a life of Christian love and faith. Mrs. Sandra Brown was preceded in death by her parents, Cedell and Magnolia (Trigg) Robinson and her adored son, Lee Boyd, III. Several siblings preceded her in death: Charles Robinson, Crawford Robinson, Billy Robinson, Carl Robinson, Walter Robinson, and Rhonda Robinson. Sandra leaves behind to cherish her memory her devoted husband, Lee Boyd Brown, Jr., her step-son, Michael Brown (Diedre), and four grandchildren: Lee Boyd Brown, IV, Donovan Brown, Olivia Brown, and Brandon Brown, all of Austin. She also leaves other family members: two sisters, Joyce Davis and Belinda Houdye; three brothers, Cedell Robinson, Jr. (Frances), Michael Robinson (Hargeet), and Anthony Robinson; two sisters-in-law, Joyce Marie Brown and Dynna Brown (Willie); two brothers-in-law, Dr. Johnny E. Brown (Carolyn) of Port Arthur and Reverend Anthony W. Brown; and a huge host of cherished nieces, nephews, cousins, and loyal friends.

https://www.flipsnack.com/alcbf/sandra-brown.html On January 7, 2021, Mrs. Sandra Brown ended her earthly journey to reside in her heavenly home. On June 2,1945, Sandra was born in Bastrop, Texas, to the parents of Cedell and Magnolia (Trigg)... View Obituary & Service Information

The family of SANDRA BROWN created this Life Tributes page to make it easy to share your memories.

Send flowers to the BROWN family.