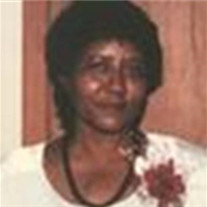 Born: February 6, 1936 in Brenhan, Texas. She was Bapitized at Mt. Pilgrams, later on became a member at Baptist Church the Later. She moved to Itasca, Texas and united with the Second Missionary Baptist Church. Education: Graduated from Stanford... View Obituary & Service Information

The family of Ruthie Wilford created this Life Tributes page to make it easy to share your memories.

Send flowers to the Wilford family.