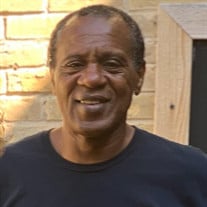 https://www.flipsnack.com/alcbf/sykes.html Robert James Sykes Sr was born June 30, 1959, to Rev Ernest and Jessie Sykes in Page WV. Robert was the 4th child of 8 children. Robert was an outstanding basketball player at Valley High School. He was graduate class of 1978. After graduating high school, he was ready for a change so he flipped a coin to determine his next steps, heads TX, tales NY. The coin landed on heads, TX. When he moved to Texas he worked in the oil fields then he picked up a part-time job driving a taxi cab to learn his way around the city. He enjoyed driving so much that he started working full time. Robert planted seeds with everyone he had crossed paths with. He was someone who healed many people just by giving them the opportunity to share and listen without judgment. Robert was everyone's peace. He enjoyed exercising, traveling, and spending time with his family and loved ones. He ran a total of 14 marathons throughout his life, did his first triathlon in 2019, and trained for his 15th marathon for 2022. Preceded in death by his parents Reverend Ernest and Jessie Sykes; his siblings, Ernestine, Jan, Jesse, Joseph, Lewis, and Wayne Sykes. He is survived by his little sister Rosemary Sykes-Givens, the mothers of his children; Billie Jean Wilson, Karen Tiffany, Pil Sop, and Amy Bollinger. His eight children Jennifer Washington (Willie) Clarissa Hall (Cordell), Jedidiah Tiffany, Barbara Brooks (Murray), Steven Brooks (Ogechi), Robert Jr (Courtney), Chanell, and Robert III. Robert had 15 grandchildren Aaliyah, Aamyah and Aamari Washington, NanaAma Kwei-Tagoe, Cameron Tiffany, Murray and Michaiah Guillory, Kamiyah Slaughter, Elijah, Mariah, and Jasiah Brooks, Isaiah, Adrian, Audri, and Zuri Sykes along with a host of family and friends. Daddy, Granddaddy Sykes, PaPa and Uncle Robert will be missed dearly by all that loved him.

The family of Robert James Sykes Sr. created this Life Tributes page to make it easy to share your memories.

Send flowers to the Sykes family.