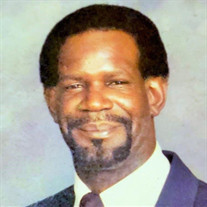 Mr. Ricci Delaine Diggs, the youngest of five children, was born to the late Mr. Dennis Diggs and the late Mrs. Louise Perkins-Diggs on August 18, 1958, at Holy Cross Hospital in Austin Texas. Ricci attended Sims Elementary, Pearce Jr. High and graduated from John H. Reagan High School in 1976. He later went on to serve some time with the United States Army. He answered God’s call on his life, joined Church and was baptized at the young age of 12, under the Pastorage of the late Rev. J.M. Miles and the Pilgrim Rest Primitive Baptist Church. He served in multiple auxiliaries, that included the Usher Board, as well as the Choir, from his youth. Ricci was a Gifted vocalist, and did light up any Church Worship with his voice, singing melodic ranges of alto, soprano and bass. He also sang with The Bells of Joy. Ricci continued his Servanthood for God and exercised his Faith in Jesus and united with the St. Edwards Baptist Church, under the Leadership of Pastor J.C. Adams. There he Faithfully served with the Usher board and assisted in other areas of the Church as needed, until his death. In 2011, Ricci was diagnosed with throat cancer. God gave him the victory in that battle. During his recovery he never lost his Hope, Trust or Faith in the Lord Jesus Christ. He loved being with his Family especially during the holiday seasons and other special occasions. Ricci even furnished the turkey and ham, for the Family Thanksgiving Celebration- which unbeknown to us, he would actually Celebrate in the arms of Jesus. Ricci cherished his beloved dog "Oreo" which he raised from a puppy. He loved watching The Young And The Restless, the Dallas Cowboys and the Texas Longhorns. Ricci lived as a very kind, loving, forgiving and understandable God-fearing man. He did not hold on to grudges at all. Ricci will be greatly missed by his Family, Church Family and Friends, although never forgotten. He was preceded in death by both parents, a sister- Mrs. Jacqueline Faye Diggs-Cook and a niece Tomeika Diggs. He has left to cherish his memory: One Brother Mr. Jerry Diggs; Two Sisters Mrs. Patricia (Patt) Diggs-Jackson and Ms. Mary Diggs, all of Austin, Texas. A dearly loved cousin (more like a Brother), Mr. Kenneth Fowler, of Seattle, Washington, several nieces and nephews and friends

The family of Ricci Delaine Diggs created this Life Tributes page to make it easy to share your memories.

Send flowers to the Diggs family.