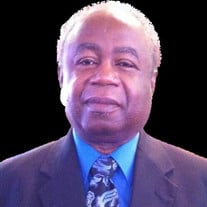 https://www.flipsnack.com/alcbf/rev-donald-williams.html Reverend Donald Williams went home to be with the Lord on February 15, 2022. He was born on November 4, 1953, to Leo Ozell Williams Sr. and Essie Mae (Myles) Williams. He was preceded in death by his parents, and brothers Andrew Stevenson of California and Edward Williams of New Orleans, and sister Sharon (Williams) Davis of Taylor. Donald leaves behind to cherish his memory his wife Janice (McDonald) Williams; two daughters from the previous marital union with Eunice Williams Bush: Angelina Williams Shelton (Hugh) of Taylor Tx, and Monica Williams Rodriguez of Pearland Tx; five grandsons, Dedrick Leon Williams of Milano TX, Hugh Dorsey Shelton Jr. of Taylor TX, Rafael Rodriguez Jr., Donovan Rodriguez, and Anthony DeJuan Rodriguez of Pearland TX; two granddaughters, Britaney Marie Shelton of Taylor TX, and Bethany Monique Rodriguez of Pearland TX; and great-grandson of Nathaniel Atreyu Myles Williams of Milano. Donald also leaves three siblings: Doris Williams Smith of Ruston La., Rev. Leo Williams Jr. of Taylor TX, and Dianne Williams Hayes (Rodney) of Columbia, Md; and many beloved nieces, nephews, Godchildren, and great friends. Born and raised in New Orleans, Donald graduated from Booker T. Washington High School and attended the University of New Orleans. He worked many years and retired from Union Carbide. All who knew Donald knew of his love for coffee, often sharing coffee dates with his grandchildren, friends, and other family. He loved to bowl and was active in several bowling leagues and tournaments while living in New Orleans. He enjoyed and missed travelling and often told of the places he had lived and visited. All who knew Donald, would tell of his smile and joking personality. He enjoyed the time spent with his grandchildren, extended family, and accumulated many close friends/relationships through the years. Donald accepted Christ when he was young and spent his life sharing the Gospel, from serving with “Faith-in-Action,” a street Evangelist team, and attending the New Orleans Baptist Theological Seminary, to serving as a Deacon and then Licensed Minister at The First Baptist Church of Taylor Tx. Donald loved the Lord and was not ashamed of his God.

https://www.flipsnack.com/alcbf/rev-donald-williams.html Reverend Donald Williams went home to be with the Lord on February 15, 2022. He was born on November 4, 1953, to Leo Ozell Williams Sr. and Essie Mae (Myles) Williams. He was preceded... View Obituary & Service Information

The family of REV. DONALD WILLIAMS created this Life Tributes page to make it easy to share your memories.

Send flowers to the WILLIAMS family.