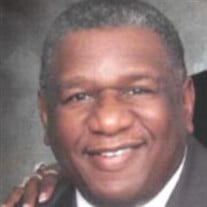 https://livestream.com/accounts/7325565/larryedwards https://www.flipsnack.com/alcbf/larry-edwards.html REV LARRY EDWARDS, 67, a veteran of the United States Army and resident of Elgin, Texas transitioned from labor to rewards on Wednesday, October 13, 2021. He was born in Austin, Texas on January 8, 1954 to the late Leroy and Elizabeth Edwards. Larry was the sixth of eight children and with his Christian religious upbringing, he gave his life to Christ at an early age. Larry received his formal education in the Austin Independent School District and graduated from Austin High in 1972. After graduation, he enlisted in the United States Army where he obtained the rank of Private First Class E3. Larry returned to civilian life and moved to Fort Worth, Texas, where he would meet and marry the love of his life Angela Williams. They were united in marriage on April 1, 1981 and celebrated 40 years of marriage on April 1,2021. To their union, three children were conceived, Kendria, Larry Jr. and Carlos. Larry and Angela loved to travel. Their travels took them to places like Niagara Falls, Grand Canyon, The Holy Land, San Francisco, New Orleans and Las Vegas, to name a few. Together they shared a love for quartet music and would often attend gospel music events and concerts. They would build their forever home in Elgin, Texas and reside there until his passing. On April 1, 1987, Larry moved his family back to his hometown of Austin, Texas. He continued his employment with the United States postal service as a mail handler. He would retire from the post office in 2019 after 39 years of service. Larry was a huge sports fan. His hobbies included attending professional and colligate sporting events for the San Antonio Spurs, Dallas Cowboys and Texas Longhorns. He was a collector of sports memorabilia and had a small business doing what he loved. Larry loved playing chess, relaxing at home in his quiet space and working in his yard. He cherished his grandson Zacharia and was a man that loved his family. In 1992 Larry rededicated his life to Christ at the Pilgrim Rest Primitive Baptist Church. Larry worked on the usher board, taught VBS and Sunday school, and worked with the brotherhood. He even led a song with the male chorus. He would later unite with the Neighborhood Baptist Church under the leadership of Pastor Lee Yarbrough and accept his calling into the ministry. He loved the word of God and he preached the word of God. Larry would go on to further his education and receive his Bachelors of Divinity from Our Lady of Guadalupe Seminary. Reverend Larry Edwards was preceded in death by his parents, Leroy Edwards and Elizabeth Edwards; his brothers, John Hayes, Calvin Hayes and Randall Edwards; his sister Carmen Jackson. Reverend Larry’s legacy will be carried on through his beloved wife, Angela Williams Edwards; children, Kendria Carter, Larry Anton Edwards Jr., Carlos Leroy Edwards; grandson Zachariah DeShawn Edwards; siblings, Julia Faye Thomas, Peggy Houston, Sharonda Lewis (Reggie); brothers and sisters-in-law, Mary Glenn (Stanley), LaTonya Lucas, Gregory Lucas, Tracy Lucas, DeWayne Lucas and Terrance Lucas; and a host of nieces, nephews, cousins and friends.

The family of REV LARRY EDWARDS SR. created this Life Tributes page to make it easy to share your memories.

Send flowers to the EDWARDS family.