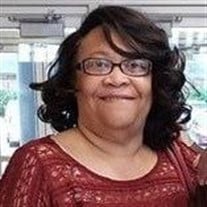 On Saturday, February 8th, 2020, Heaven received another angel… Renita Cheryl (Sherri) Isikuru, age 62, was born on August 10, 1957 in Austin, TX, the daughter of Minnie (Hunter) Carrington and the late Willis Neal. She accepted Christ at the young age of six. Her mother shares the memory of when her precious daughter oddly chose to sit by herself at a morning church service so that she would not be told, during those days, that she was “too young to understand what it means to give your life to Christ.” On that Sunday, Renita proceeded to the front of the church by herself, gave her life to Christ, and became a member of Emmanuel Baptist Church in Austin, TX where her stepfather, the late Rev. W.H. Carrington, served as Pastor. The baptism was moved to Sweet Home Baptist Church in Clarksville, TX. She was baptized by her stepfather and the late Rev. Logans. Her grandfather, the late Rev. H.J. Carrington, Sr. served as Pastor. As a preacher’s kid (PK), Renita continued to serve in the church where her stepfather would Pastor. Many years later, the family became members of New Lincoln Baptist Church, where the late Rev. A.R. Evans, Sr. served as Pastor. Renita taught Sunday School, sang alto in the choir, and enjoyed performing instrumental duets on the flute with her little sister on the violin. She also played the gospel song “Something’s Got a Hold of Me” as a soloist. She met the love of her life and husband of 38 years, Moses O. Isikuru in college. To this union, four children were born. The Isikurus soon joined her mother’s family church, New Light Ebenezer Baptist Church, where Rev. Frank Cage serves as Pastor. They later moved to Mt. Zion Baptist Church, where Rev. G.V. Clark serves as Pastor. For her early education, she attended L.L. Campbell Elementary and Pearce Jr. High. She graduated from J. H. Reagan High School in 1975 and received numerous academic awards while there, including the National Honors and Merit Scholarship. She also played the flute in the marching band. Renita received a full scholarship to attend the University of Texas at Austin (Hook ‘em Horns) and earned a Bachelor’s degree in Economics. As a fun fact, she made history at UT by becoming their first African American fencing champion. Most of Renita’s professional career was spent working for Texas Medical Association (TMA) and AT&T. She worked her way up to managerial roles and had ample experience in leading teams and mentoring others along the way. Personally, Renita was self-taught in photography/videography and loved spending time on her craft. She diligently served in the Media Ministry at Mt. Zion Baptist Church. Her family and friends were blessed by her loving, patient, thoughtful, and kind spirit. She was so intelligent, yet humble. Family was everything to her and she spent as much quality time with them as possible. Renita loved serving others by documenting their special occasions and was gifted in transforming her videos and photos into unique keepsakes to preserve memories. Fondly known as the “family historian,” she enjoyed connecting family members to each other and continually enlightening them about their rich heritage and roots. Preceding her in death are her father Willis Neal and stepfather Rev. W.H. Carrington, along with other beloved siblings, cousins, aunts, uncles, and grandparents. Cherishing her memories are her husband of 38 years, Moses Isikuru of Austin, TX; mother, Minnie Carrington of Austin, TX; three daughters, Ejiro Erogbogbo (Folusho) of Plano, TX, Ese Isikuru of Austin, TX, Ochuko Hope (Quentin) of Pearland, TX; son, Ovoka Isikuru of Austin, TX; sister, Madeline McCauley (Christopher) of Schertz, TX; and four brothers, Ronald Carrington of Austin, TX, Jeffrey Neal of Jackson, MS, Mark Neal of Austin, TX, Greg Neal of Austin, TX. The most recent joys of her life were her precious grandson Quentin Hope, Jr and granddaughter Lana Erogbogbo. Also forever cherishing her memories and continuing her legacy are her two nephews, Johnathan Butler (Marylou) of Kyle, TX and Christian McCauley of Atlanta, GA.; aunts, Mary Broadnax (Ben) of Dallas, TX, Ima Neal-Jones of Austin, TX, Bobbie Neal of Austin, TX; uncles, Norwood Hunter (Wanda) of Houston, TX and Sylvester Neal of Auburn, WA; extended family members, the Akpobomes, the Oderhowos, the Erogbogbos, the Hopes, the Laras; and many other dear cousins, extended family, and friends. We are forever grateful for the deep impact of Renita’s life. Her legacy of genuinely loving and serving God, family, and friends will continue to live on through all of us.

The family of Renita Cheryl (Sherri) Isikuru created this Life Tributes page to make it easy to share your memories.

Send flowers to the Isikuru family.