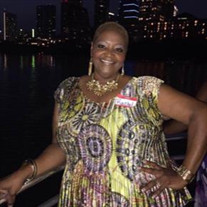 Livestream Link: https://mtzionmbc/youtube.com https://www.flipsnack.com/alcbf/rachel-banks.html Rachel Felicia Banks passed away January 1, 2022 at the age of 54. She was born December 7, 1967 to George and Verna Cole in Huntsville, Texas as the first of four girls and was the apple of her father’s eye. Rachel grew up in Huntsville. She accepted Christ at a young age and became a member of Mt. Zion Missionary Baptist Church under the leadership of Pastor Andrew Isaac. She sang with her sisters, The Cole Sisters. They sang at their home church and surrounding churches. Rachel graduated from Huntsville High School in 1986 and went to Wiley College in Marshall Texas, where she loved traveling and singing with the college choir. She transferred to Huston-Tillotson and worked at the Capitol as a secretary for State Representative Hightower until he left office. While living in Austin, she met Leonard Banks III, in the summer of 1988. They married March 24, 1990 and had three children. She loved her husband and children deeply. The family became members of Greater Love Baptist Church, under the leadership of Rev. M. R. Carter where she sang in the choir and served in various ministries. In 1999, they became Co-Pastors of St. Paul Missionary Baptist Church in Kimbro. As Co-Pastor, Rachel truly shined as a friend, a leader, a confidant, and counselor. She loved freely and unconditionally. She gave of herself so easily, with joy. She made friends with whomever she met and always spoke of the grace and mercy of Jesus Christ. This was her life’s mission. As a minister, she shared the gospel with passion and fire. She was a warrior for Christ wherever she went and never wavered. Even after open heart surgery and other health struggles, Rachel never doubted Christ or his love for her. She told everyone, that “God is keeping me.” In 2017, they became members of Agape Christian Ministries under the leadership of Bishop L. A. Wilkerson. Leonard and Rachel were married 31 years. They adopted three additional children who were left under their care. They were given love, a home and a family. Rachel loved to sing. One of her favorites was “I love to praise him.” She would start and make everyone else sing along. Rachel could cook. We often compared her food to Aunt Corine’s and she was a baker as well. She could bake anything and do it well. She was known fondly for her pies, cookies, and pound cakes. If Rachel liked what you cooked, you knew you had done a great job. She also organized every family gathering and vacation. She gave out assignments and you could not deviate from the plan. As a family we often said she had a “take over” spirit. Her reply was, “If I organize it, it will be done right.” We all knew this was true, but we would laugh anyway. The most remarkable thing about Rachel was her ability to form relationships with people. Everyone she met loved her because she loved so easily. Rachel was preceded in death by her father George Edward Cole. She leaves to cherish her memory, a loving husband, Leonard Banks III, her children Leonard Darian Banks IV, LaQuinta Verchelle, Darius D’Shaun, Jazmine Latrice, McKayla Clarise, Kevin Andrew, and Derrick Isaiah, 4 grandchildren, her mother Verna Mae Cole, four sisters, Paulette Stowers (Charlie), Erika Bryant, Tammie Franklin, and Georgetta Cole, three adopted sisters, Tiffany Morgan, Yolanda Rector, and Carol Steamer, six nieces and nephews, her best friends, Nikita Satberry and Patricia Dunn, a special son in the Ministry Leslie Dunn, countless relatives and friends.

Livestream Link: https://mtzionmbc/youtube.com https://www.flipsnack.com/alcbf/rachel-banks.html Rachel Felicia Banks passed away January 1, 2022 at the age of 54. She was born December 7, 1967 to George and Verna Cole in Huntsville, Texas... View Obituary & Service Information

The family of RACHEL FELICIA BANKS created this Life Tributes page to make it easy to share your memories.

Send flowers to the BANKS family.