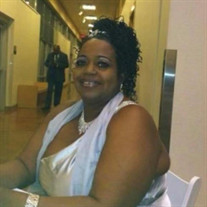 Phyllis Elaine Williams Rowe, age 60, passed away peacefully on January 07, 2021 due to complications from kidney disease. Phyllis was born February 6, 1960 in Brownwood, Texas to Robert and Vera Williams. She married Johnny Rowe in October of 1982 in Brownwood, Texas. They had three sons, Isaac, Marcus and Benjamin. Phyllis loved music, playing the piano and worshiping at her father’s church, Bethel C.O.G.I.C, where she was a member of the church choir. After graduating Brownwood High, she attended Tyler Junior College where she played clarinet in the marching band. Phyllis also loved to cook and to eat, and had a passion for fashion. Her cooking skills were especially enjoyed by her three boys. Her famous peach cobbler and soul food recipes were among their favorites. Her hands were rarely still. She enjoyed being outdoors, going fishing and being around people. Before her illness prevented her, Phyllis was attending Austin Community College working towards a degree to become a chemical dependency counselor. She was an advocate for the homeless community speaking for the Austin City Council on their behalf. Phyllis used to always say: “Bounce Back! You have been given another day so it’s time to bounce back”. Her favorite Bible verse, John 3:16 — “For God so loved the world that he gave his only begotten Son so that whosoever believes in him will not perish but have everlasting life.” Phyllis is survived by her spouse Johnny and sons Isaac, Marcus, Benjamin and daughter-in-law Amber. Her mother Vera Williams, sister Robin Williams, and brothers Rodney, Derwin and Greg Williams, and sister-in-law Danielle Williams; grandchildren Symphony, Amali and Anavi and nieces/nephews Christopher, Lacresha, David, Alexandria, Mason, Connie and Kobe. All of whom she loved deeply.

The family of PHYLLIS ELAINE ROWE created this Life Tributes page to make it easy to share your memories.

Send flowers to the ROWE family.