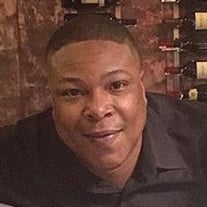 Peter Cornell Murray was an example of what a determined, fiercely loyal, cheerful and adventurous life looks like. Peter, affectionately known as “Pedy” by his family, was born in Austin, TX to parents Tracey and Earnest on February 20, 1972. His name was the blending of love shared for Tracey’s father Duke Carnell and her mother, Christine’s love of biblical names. Peter was the oldest of 3 brothers – along with Ernest Jr. and Michael, they were a trio with a great bond. He was very protective of his brothers and was always ready to defend and care for his family in an instant. The same can be said of him today. As a child, Peter loved the outdoors and would enjoy playing with his brothers and friends, as often as he could. It was in these early years that he discovered his love for martial arts and would happily practice on all the kids in the Brookswood neighborhood, where they lived. Although he attended several high schools, he was a graduate of Lanier High School. Peter’s life was forged through fire. He faced many circumstances with faith and persistence. Despite the challenges he faced in life, he always kept a smile, a positive word and was motivated to live and love! In January 2002, having just moved from California to Austin, TX with her daughter (Jasmine), Stephanie had a chance encounter with Peter that would turn into a loving relationship that would last nearly 18 years. Sent as a backup crew to assist Stephanie with unloading after a relocation, Peter was instantly smitten with her. That day, Peter found his way to share his number and they would have their first date on January 11, Stephanie’s birthday. By February 13, 2003, the two were married and remained faithfully in love until his passing. The two were intentional about enjoying the world and would take trips together where they could relax and explore other cultures. He was a “larger than life” personality! His laugh was infectious and took his enjoyment of life seriously. If you knew Peter well, he was a man of many thoughts and had deeply held convictions and opinions that guided his style of living. He deeply cared about his family, achieving their goals and dreams and ensuring they felt loved all the time. Peter enjoyed reading and learning about the world, as well as various faiths and religions. It was important to him to understand the world and be able to relate to others. He also loved his artillery collection and would showcase it to friends and family when he could. Peter was also an avid gamer and enjoyed playing a good round of “Dungeons and Dragons.” He would often call his home a “fortress of solitude” and enjoyed the peace of their quiet neighborhood in the suburbs of Atlanta, GA. Peter was looking forward to Jasmine’s graduation in 2020 and although he will be absent, we know that he would be cheering her on from the crowd. He was very proud of her! We are sad bid farewell to our beloved, Peter, and are mindful of those who have preceded him in death including: Duke & Christine Murray (grandparents), Ernest Smith (father), and Anthony & Nelda Spears (uncle/aunt). Left to carry on his legacy are Stephanie Murray (wife), Jasmine Donald (daughter), Carnisha Smith (daughter), Tracey Smith (mother), Ernest and Michael Smith (brothers), Thomas “Lynn” Murray (uncle), Joy & Leon Smith (aunt/uncle), along with nieces, nephews, and cousins and grandchildren (Nayren, Destiny, Jeremiah and Noah) that meant so much to him. He was a towering presence and a man of God that we can all be proud to have known so well!

Peter Cornell Murray was an example of what a determined, fiercely loyal, cheerful and adventurous life looks like. Peter, affectionately known as &#8220;Pedy&#8221; by his family, was born in Austin, TX to parents Tracey and Earnest on February... View Obituary & Service Information

The family of Peter Cornell Murray created this Life Tributes page to make it easy to share your memories.

Peter Cornell Murray was an example of what a determined,
fiercely...

Send flowers to the Murray family.