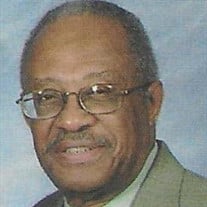 https://livestream.com/accounts/7325565/percyrichardson https://www.flipsnack.com/alcbf/percy-richardson.html Reflections of a Celebrated Life Percy James Richardson I have fought a good fight, I have finished my course, I have kept the faith.... View Obituary & Service Information

The family of Percy James Richardson created this Life Tributes page to make it easy to share your memories.

Send flowers to the Richardson family.