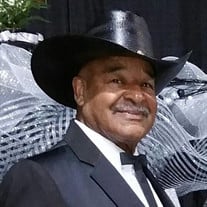 https://livestream.com/accounts/7325565/pauljones https://www.flipsnack.com/alcbf/paul-l-jones-tcjl7r2ilw.html Paul Luchen Jones July 31, 1941—June 3, 2021 His smile, the twinkle in his eyes, his trademark western attire featuring a black Stetson hat and Lucchese boots are among the memories many will miss about Paul. However, most will miss his love, friendship and commitment to bringing about positive change on several fronts. Family has always been Paul’s core reason for being and at the heart of that core is his wife, Alberta. Their 47-year relationship has been an epic love story. The Jones family of two daughters and a son continues to grow with many grands and great grands whose unconditional love always brought joy to their “pa-pa.” A native of Detroit, Texas, Paul grew up in a large family that included 11 siblings. He learned early to give his all regardless of the tasks before him. As a youth, giving his best sometimes meant many days of chopping cotton “from can’t see to can’t see” (before sunrise to after sunset) and picking more than a 600 pounds of cotton a day during harvest season. After graduating from Detroit High School where he was an outstanding basketball player and while attending the historic Texas College, Paul was drafted by the United States Army. He served in Korea and Vietnam. After four years of service in the military, Paul earned his bachelor’s degree from Lamar University in Beaumont. After 43 years at Gulf States Utilities/Entergy in Beaumont, Paul retired as training and development manager. In addition to his regular work at Entergy, he represented the company at events and in programs throughout the South. Shortly after retirement, Paul stepped into the oftentimes weighty role of civic and community leader and church servant. As a member of the Ebenezer Missionary Baptist Church in Beaumont, Paul was very active in various ministries, including leading the Voter Education Ministry and teaching the free Financial Literacy God’s Way classes. He worked with pastors across the region in establishing and facilitating the Sunday Souls to the Polls program. After moving to Austin, the Jones became committed members of the Mount Olive Baptist Church where he also taught the free Financial Literacy God’s Way classes. Well rounded in his interests, he supported the arts, economic development, environmental improvements and the overall well-being of humanity. As president of 100 Black Men of Beaumont, Inc., Paul was instrumental in the success of several grassroots projects ranging from youth mentor ing and college scholarships to health awareness, strengthening the family and social activism. He served the Beaumont Chapter of the NAACP as its president and chief executive officer. A consummate businessman, Paul worked to solidify the organization’s outreach to youth, senior citizens and the general community in support of the NAACP’s ongoing work for racial justice and equality. On the educational front, Paul served on the Beaumont Independent School District’s Bond Committee that oversaw nearly $400 million of new schools and other facility improvements. He was a consummate volunteer for organizations as “I Have A Dream” and “Inspire, Encourage, Achieve” (IEA) missioned to mentor and provide scholastic support for disadvantaged and troubled youth. He worked with the leadership team at Lamar Institute of Technology in Beaumont to develop one of its most popular two-year programs. Cancer awareness and voter rights were also high on Paul’s list of community and civic work. His work also helped to diversify new classes of police recruits for the City of Beaumont and laid groundwork in an effort to protect voter rights throughout Jefferson County. The techy, engineering Paul was an outdoors man who built two country retreats for his family. He was working on patenting gadgets and products he designed such as his unique table/chair hat hanger and a freestanding boot/hat/shoe rack. With Alberta at his side, Paul enjoyed music. From gospel to blues and country, they rocked from the church pews and waved their hands toward heaven. The beat of diverse music inspired their synchronized struts across barn floors, waltz in ballrooms and freestyle soulful moves at home parties. They loved dancing, entertaining and helping others grow in their Christian walk as well as achieve professional and educational excellence.

The family of PAUL L. JONES created this Life Tributes page to make it easy to share your memories.

Send flowers to the JONES family.