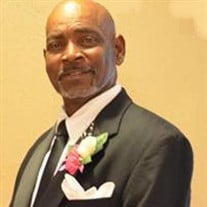 https://www.flipsnack.com/alcbf/patrick-hunter.html Patrick Hunter was born on April 4, 1962 to Matthew and Icella Hunter, in Austin, Texas. He was the ninth child in a family of ten. He attended Austin Public Schools. Patrick received Christ at an early age and was a member of Rehoboth Primitive Baptist Church under the leadership of Reverend R.D. Reese. As a youth and young adult member, he was an Usher, Choir Member, and faithful BTU and Sunday School student. He participated in the El Bethel Primitive Baptist District Association. As an adult, he joined St. James Missionary Baptist Church under the leadership of Dr. B W. McClendon, Sr. until he was called home by God. Patrick was a Certified Auto Mechanic and worked for Avis Rent A Car, and Auto Zone. He was a mechanic to all, but Patrick will forever be remembered as “The Mechanic for Single Mothers”. He always expressed that mommas need to get to work and children need to get to school. Patrick was married to Scheryl Bigham-Hunter and immediately embraced her children as his own. Together they had one son, Stephen Hunter. As seasons change, so does relationships. Patrick and Scheryl sustained a lasting friendship after the season change. Patrick was a loquacious person, one to talk a great deal. No matter the subject, he felt obligated to elaborate on it. When in his company, there was never a silent moment. He loved meeting new people, that meant he got the opportunity to tell a new story. Patrick was preceded in death by his parents; 5 brothers, Matthew Hunter, Robert L. Hunter Sr., Donald R. Hunter, Sr., Harvey Hunter and Daren Hunter; 2 sisters, Barbara Hunter, and Rhonda Hunter-Cleveland. Patrick leaves to cherish his memory, his children, Cecil Hunter, Michael Sterling, Stephen Hunter, Praylah Winn, Eva Hunt, Martin Polk, LaShara Polk; siblings, Lester I. Hunter, Sharon (Carlton) Whitehurst, Coy Dove, and Billy Steen; Five grandchildren along with a host of nieces, nephews, and other relatives and friends.

https://www.flipsnack.com/alcbf/patrick-hunter.html Patrick Hunter was born on April 4, 1962 to Matthew and Icella Hunter, in Austin, Texas. He was the ninth child in a family of ten. He attended Austin Public Schools. Patrick received Christ... View Obituary & Service Information

The family of Patrick Hunter created this Life Tributes page to make it easy to share your memories.

Send flowers to the Hunter family.