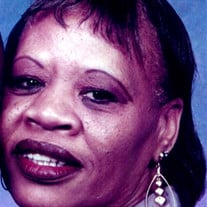 Pablyn Denise Davis, daughter of late Verna Lee Davis was born on February 11, 1957 in Giddings, Texas. She attended public schools of Lee County and was a graduate of Giddings High School. At an early age she professed her faith in Jesus Christ... View Obituary & Service Information

The family of PABLYN D. COOK created this Life Tributes page to make it easy to share your memories.

Send flowers to the COOK family.