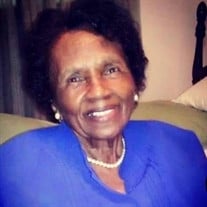 https://livestream.com/accounts/7325565/otiswashington https://www.flipsnack.com/alcbf/otis-mae-washington.html A Life of Trials, Tribulations, Love, Joy, Sharing and Giving &#8220;Trust in the Lord with all thine heart, and lean not unto... View Obituary & Service Information

The family of Ms Otis Washington created this Life Tributes page to make it easy to share your memories.

Send flowers to the Washington family.