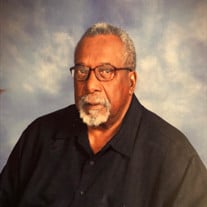 Otis Lee McShan was born on October 4, 1943 and was called home to his Lord and Savior, Jesus Christ, Sunday morning, March 3, 2019. He has joined his beloved son Fredrick who preceded him in death. Otis was the oldest of four children from his deceased parents Otha McShan and Marie Bell McShan. He was born and raised on a form where his parents farmed and raised livestock (cattle) located five miles east of Elgin, Texas, on McShan Lane, Bastrop County. Otis was affectionately given the nickname “man-child” as young child due to his large size. Otis was a big boy, a big man with a big heart and loved his family, friends, and his God unconditionally. He was raised in a strong Christian family and professed hope in Christ at an early age. He was baptized at the Pleasant Hill Baptist Church in the community of Sayersville, Texas. Otis attended Booker T. Washington School in Elgin and graduated in 1963. During high school he excelled in football and track. After high school he attended Prairie View A and M University and was player of the Panther football team. He was drafted into the military and served in the United States Air Force serving his last two years in Europe stationed in Italy and Spain. While serving in the military he was recruited for his athletic prowess to play for the U. S. Air Force Special Forces football team. He was one of the best in the position of defensive end and unfortunately an injury to his leg prevented him from pursuing professional football. Upon completion of his military duty he returned to Elgin. He met and married the love of his life, Jessie Taylor. To this union three children were born. Otis was a career commissioned peace officer and had a great career in law enforcement. He joined the Travis County Sheriff department rising to the rank of lieutenant and retired in 2000 after serving 28 years. He was a family man, and friend to all. He was compassionate, humble, and served faithfully as a deacon of Corinth Baptist Church. He loved the outdoors, growing vegetables in his garden and was an avid fisherman and hunter. He and his fishing buddies and would get on the boat and fish most of the major lakes and rivers in central Texas. He loved to hunt and go to the farm and trap feral hogs. The one thing that Otis loved was Barbecuing (BBQ). When there was a family reunion, special family gathering at church functions, you could always count on Otis to do the BBQ. Otis lived in Austin, however, he was always at the farm taking care of the cattle operation with his father. When his father passed in 2005, he took care of the farm until his brother Milton moved back to the farm in 2018 California. Left to cherish his memory is his wife of 48 years, Jessie Taylor McShan; sister Gladys Barnes; Brothers George H. McShan, Milton McShan, Children Angela McShan, Andrea McShan, and 7 grandchildren. He was preceded in death by his father Otha McShan, mother, Marie Bell McShan, son Fredrick McShan.

Otis Lee McShan was born on October 4, 1943 and was called home to his Lord and Savior, Jesus Christ, Sunday morning, March 3, 2019. He has joined his beloved son Fredrick who preceded him in death. Otis was the oldest of four children from... View Obituary & Service Information

The family of Otis Lee Mchan created this Life Tributes page to make it easy to share your memories.

Send flowers to the Mchan family.