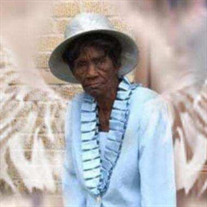 Ora Lee was born June 5, 1930 in Reagan Texas to William Roberts and Minnie Hickman. She attended school in Marlin, Texas and accepted Christ at an early age for her personal Savior. Sister Green united in holy matrimony to Joe Mike Green in... View Obituary & Service Information

The family of Ora Green created this Life Tributes page to make it easy to share your memories.

Send flowers to the Green family.