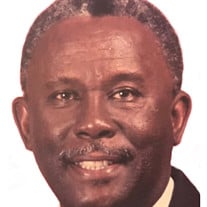 Odell Jackson was born on June 12, 1943 in Gandy, La to the late Fred Jackson and the late Esther Mae Workman Jackson. He moved to Idabel, Oklahoma at an early age and graduated from Booker T. Washington Senior High School, in Idabel, Oklahoma. He worked for Weyerhaeuser Saw Mill in Wright City, Oklahoma for over 20 years while attending High School and continued to work after he graduated. Odell believed and professed Christ as his Lord and Savior and united with the Church of Christ in Idabel, Oklahoma. In the early eighties Odell moved to Austin, Texas and was employed by Lockheed-Martin and Dell Technologies. Odell was a good Father and Husband he enjoyed family time at home as well as cooking and he was very good at it. He loved a good ribeye steak, barbeque baby back ribs, his wife’s butter pound cake, and turkey and dressing with giblet gravy. Odell loved to fish, cook, work in the yard, plant beautiful flowers, work in his garden, and sit out on the deck early in the morning with his coffee and listen to the news. If Odell wasn’t outside you could find him in the computer room working on the computer and listening to some good quartet music, he could listen to them for hours. Some of his favorite songs were “Somewhere around God’s Throne” and “Sending up My Timber”. Odell was united in Holy Matrimony to Excise Jackson to this union he had two stepsons, Willis and Willard Jackson. Odell was united in marriage on July 1, 1989 to Sarah Burse Jackson to this union he had a stepson, Rodney Lamont Delmore and one daughter Ariana Deshawn Jackson. Odell was preceded in death by his parents, Fred Jackson and Esther Mae Workman Jackson, brother, Nathaniel Hood, sisters Wilma Mae Hood, Marie Yearby, and Maedell Jackson. His memories will forever live in our hearts. His wife, Sarah Burse Jackson, (Austin, Texas), daughter Ariana Deshawn Jackson, (Austin, Texas), stepsons, Rodney Lamont Delmore,(Austin, Texas), Willis Jackson (Broken Bow, Oklahoma) and Willard Jackson, (Broken Bow, Oklahoma) His sisters Novie Booker (Sam) (Stroudsburg, Pennsylvania) and Betty Allums (Oklahoma City, Oklahoma) and many nieces, nephews, cousins, and friends.

Odell Jackson was born on June 12, 1943 in Gandy, La to the late Fred Jackson and the late Esther Mae Workman Jackson. He moved to Idabel, Oklahoma at an early age and graduated from Booker T. Washington Senior High School, in Idabel, Oklahoma.... View Obituary & Service Information

The family of Odell Jackson created this Life Tributes page to make it easy to share your memories.

Send flowers to the Jackson family.