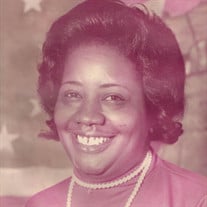 Nettie Deloris (Sanders) Robertson On June 3, 1931 Nettie Deloris (Sanders) Robertson was born to James A. and Beulah (Jones) in Bartlett, Texas. Nettie was blessed with (2) sons, Reginald and Bruce Turner. Nettie attended Bartlett ISD and in graduated from L.C. Anderson High School in Austin, Texas. She later attended Prairie View A&M University earning a bachelor’s degree in Home Economics. Nettie continued her education at Southwestern University and received her master’s degree. She began her educational career at Bartlett ISD and taught at Liberty Hill ISD and retired form Taylor ISD. She taught for 40 years and loved her students! At the age of 11 years old, she gave her life to Christ. She was a faithful member of Allen Chapel A.M.E. Church in Taylor. Nettie taught Sunday School and later became the Superintendent. She attended Bible Study and was a devoted worker in the church. She was a member of many organizations in Williamson County as well as a Chair for the Williamson County Grand Jury. Nettie was well known in the City of Taylor and the surrounding areas by many and she was always willing to help anyone she could. She had a heart of gold and will be sorely missed! Nettie was preceded in death by her father, James A. Sanders, mother Beulah Sanders, sisters: Connie Bradshaw, W. Rae Bledsoe, Marilyn Parker and Ruby Roscoe, brothers: Cleo Brown, James A. Sanders, Jr. and Lloyd Sanders, and her son Bruce Turner. She leaves to mourn (3) brothers; Thomas Sanders of Austin, TX, Edwards (Deanna) Sanders of Las Vegas, NV and Bruce (Renita) Sanders of Austin, TX. She was a proud grandmother of Damion Turner, Gabriel Turner, James Turner and Jordan Turner, along with (2) greatgrandchildren. On the eve of September 1, the Lord called Nettie to return home. Her soul has taken flight to a place of eternal rest. I have fought a good fight, I have finished my course.. II Timothy 4: 7

The family of NETTIE D. Robertson created this Life Tributes page to make it easy to share your memories.

Send flowers to the Robertson family.