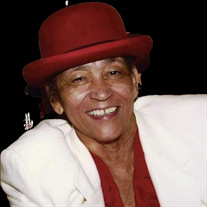 https://youtu.be/6bFaK-h9IXg https://www.flipsnack.com/alcbf/nancy-crayton-jones.html https://invest.htu.edu/campaigns/in-memory-of#/ Nancy Pearl Crayton Jones was born June 30, 1932, to the late Plato E. Crayton, Sr., and the late Lillie Mae (Medearis) Crayton in Austin, Texas. Nancy was the fourth of eight children. She was baptized at an early age at Greater Mount Zion Baptist Church by Pastor, Reverend N.S. Brown, and participated in all youth activities. Nancy received her education in the Austin Independent School District. She was a member of the L.C. Anderson High School class of 1949. After graduation, she was awarded a music scholarship and attended Tillotson College. While there she met people who turned out to be lifelong friends. While at Tillotson, Nancy was introduced to the world of Greek organizations and pledged Delta Sigma Theta Sorority, Inc. (DST), where she was initiated as a charter member of Alpha Kappa Chapter. In 1952, the board of directors of both Samuel Huston College and Tillotson College agreed to merge and became Huston-Tillotson College. In 1953, Nancy earned her Bachelor of Science degree in Physical Education, becoming a member of the first graduating class of Huston-Tillotson College. (She also earned a degree in playing bid-whist.) After graduation her first teaching position was in Taylor, TX. During her summers, she was a lifeguard in Austin, TX (Rosewood Park), where she taught many local youths to swim. She desired to further her educational pursuits by attending summer school at Prairie View A&M College and Texas Southern University with her sister Mabel. She earned a degree in Special Education from Texas Southern University and subsequently taught students with intellectual disabilities. She met the love of her life, the late Vernal O. Jones, Jr. in Austin, Texas. In 1959, in Georgetown, TX, with her dear friend Katherine (Sugar) Hillard by her side as a witness, Nancy and Vernal were married. Vernal was a member of the United States Air Force. When duty called, they traveled together to many domestic and international locations. Their joyful union produced three wonderful and loving sons: Christopher Quinn Jones, Stewart Royce Jones, and Vernal Stanford Jones. While the family moved around the world in support of Vernal’s Air Force career, Nancy ensured the family was always kept safe and that the needs of her family were always met. Nancy made many lifelong friends during her travels. She would not hesitate to walk up to someone and start a conversation or comment on an outfit she liked, or just say hello. She was even known to stop a random child and ask them all sorts of questions about school, activities, or just “be nosey.” Nancy also loved to cook, and her exposure to various cultures enhanced her cooking abilities and techniques. She also picked up the skills and grace to be a hostess extraordinaire. Upon her return to Texas, and to the surprise of family and friends, she incorporated her newly acquired cooking skills into a dinner party of southern cooking. She never lost her touch playing a good game of dominoes, which she won most of the time. The smell of cooking was always present in her home as well as the sound of laughter, music, and her humorous “fussing.” If you were to drop by, she would offer you a drink and fix you a meal in no time. Though she mastered many great recipes, she would reach out to her big sister, Anna, for advice on pie crusts. The legacy of Delta Sigma Theta instilled the values of sisterhood, scholarship, service, and social action. Nancy forged forward by working tirelessly for her alma mater. She held offices in her alumni association, giving her time, giving monetarily, and establishing a scholarship in the name of her late husband. In 1994, the directors and trustees of Huston-Tillotson College awarded her the honorary degree of Doctorate of Humane Letters. She was very proud to have received this recognition. Her service to others included working with numerous organizations including Meals on Wheels, Habitat for Humanities, Special Olympics, and the North Texas Food Bank. Her love and commitment to her illustrious sorority was shown in many ways, including becoming a lifetime member. Nancy was one active person, she always made time to attend weddings, graduations, birthdays, football games, and other milestones and accomplishments. She was always right there – front row! Nancy was preceded in death by her loving husband, Vernal O. Jones, Jr; her parents Plato E. Crayton Sr. and Lillie Mae (Medearis) Crayton; her siblings, Plato “Kido” E. Crayton, Jr., Mabel E. Crayton Williams, Marjorie Crayton Wilson, Mae Kathryn “Baby Kay” Crayton Washington, and Samuel “Jack” C. Crayton Sr. She leaves to cherish her memory: her sons (the heartbeats of her life): Christopher Q. Jones (Dietrich), Stewart Royce Jones (Dawn), Vernal “Scooter” Jones (Rochella); Grandchildren: Loren A. Jones (Cinor), Brandon D. Jones (Samantha), Camron D. Jones, Ellington H. Jones, London L. Jones, Bria K. Jones, Natasha R. Jones, Major V. Jones, Triana M. Jones, Manna E. Jones, Marche’ A. Baker; Great-grandchildren: Braxton L. Allen, Mason Jones, Madyson Jones, Masiah Jones, Quinn A. Jones, Bailee L. Allen. Jones, Ava J. Jones; Sisters: Anna Crayton Warren, Minnie “Baby Sis” Crayton David (Donald); Sisters-in law: Esther Jones Bell, Charlyce Jones-Owen (Richard), Evelyn Miller (John), Minnie B. Crayton; Brother -in-law: Gregory Jones (Phyllis); Goddaughter: Alicia Childs; and a host of nieces, nephews, relatives, and friends. Nancy will forever be loved, cherished, and missed by all who knew her.

The family of Dr. Nancy Pearl Crayton Jones created this Life Tributes page to make it easy to share your memories.

Send flowers to the Jones family.