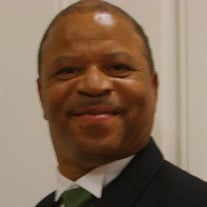 https://www.flipsnack.com/alcbf/mitchell-alberts-sr.html Elder Mitchell Wayne Alberts Sr. was born in Slaton, TX in a loving devoted Christian family on the outskirts of Austin, TX. Mitchell is the third child born to Henry & Bobbie Burns Alberts. To this union 8 children were born, all being reared in faith, prayer, & love. Mitchell’s father served as head deacon and his mother served as a District Missionary. Mitchell was nurtured and raised at the Holy Temple Church of God in Christ, where he accepted Christ at a young age under the leadership of his grandfather, Superintendent D. L. Burns (Big Daddy). Mitchell graduated from Manor High School, class of 74, with a football and track scholarship to Texas A&I (Kingsville TX). To develop leadership skills, and a life-long habit of giving back, Mitchell joined Kappa Alpha Psi Fraternity. In 1977, Mitchell joined the National Guard service, receiving various decorations and medals before being honorably discharged at the rank of Sargent E-5. The scholastic knowledge obtained from the university and the military helped to navigate his career through many fields in the workforce, from firefighter, manager, carpenter, realtor, and most recently accountant. However, none would be as satisfying as his call to ministry to preach the word of God. Mitchell received his Associate Degree from Austin Community College in Business Administration & Real Estate. He also obtained a bachelor’s and master’s degree in Christian Counseling and a PHD from the Pneuma Theological Seminary of Oakland California. Mitchell was a lover of sports on every level and remained a die heart fan of the NFL Team (Raiders) and the Texas Longhorns. When it comes to TV shows, Mitchell enjoyed the broadcast of “The Andy Griffith Show” and “Good Times” as they brought him tons of laughs. On a love note, Elder Alberts met and married the love of his life (Stelneka Carter Alberts) of Houston TX. What a joy she brought to him through travelling, laughter, cooking, watching movies, going to church, and talking about their next vacation spot. Together, they were a team that loved God and loved each other. Elder Alberts would say, “The best of my life was spent with this woman.” On March 14, 2022, the couple was looking forward to celebrating their 10th year wedding anniversary. Elder Alberts received his ministerial license under the late, Supt. D L Burns and preached his first message on October 31, 1988, using the script from John 3:1-7 and titling it, “You must be born again.” After the passing of Superintendent D. L. Burns, Elder Alberts remained at the Holy Temple Church of God in Christ, under the leadership of Superintendent Curtis Burns and was ordained by the late, Bishop CL Bryant, of the Texas Southeast Third Ecclesiastical Jurisdiction. For many years Elder Alberts endeavored to preach and win souls. He flourished in various roles within the church from preaching, singing in the choir and teaching Sunday school & YPWW. Elder Alberts never shied away from a challenge to spread the word of God. Using his talents, Elder Alberts began singing with a family quartet group known as “The Tones of Glory.” Upon leaving for college, he joined other groups but continued to sing. Later in life, Elder Alberts decided to take his singing to the next level and joined “The Sensational Royal Lights”, one of Austin’s original quartet groups, where he later took over as manager of the group. The Royal Lights are known as one of the longest standing groups of the Austin Quartet Association. Being determined to play the guitar, he attempted to learn from others and would say, “I may not be the best, but I love what I do.” Elder Alberts was jubilant, full of life, soft spoken, and always refrained from speaking evil of others. In 2019, Elder Alberts returned to the home church, under the leadership of his eldest brother, Superintendent Clarence Alberts, of the Burns Memorial Temple Church of God in Christ, where he served as Assistant Pastor. It was here that he initiated many outreach programs, including a food pantry in Manor, TX. His charismatic style of preaching and humorous personality filtered over to his sermons as he continued to serve faithfully under Superintendent Clarence Alberts until his demise. The work of the Lord was always first and foremost in his heart. He consistently thanked God for using him as a vessel as he watched God bless His people through his musical singing & guitar playing. His favorite verse was I Peter 5:6-7, “Casting all your care upon him; for he careth for you.” Elder Alberts was preceded in death by both parents (Henry and Bobbie Alberts) and a sister (Brenda Faye Alberts Alfred). He was a loving husband, father, brother, and uncle to his nieces and nephews. His love extended to all family members. To cherish his memories, Elder Alberts leaves a beautiful wife, Stelneka Carter Alberts. Children: Mitchell Alberts II (Rosa), Tasha Alberts, Tanita Tinnon (Mother Carolyn Tinnon) And Courtney Monique Moten Alberts (Mother Robin Moten). Grandchildren: Mitchell III, Kalil, Josiah, and Karisma Jay. A very special friend and confidant, Dr. Ekaterina Alberts of Russia. Siblings: Supt. Clarence Alberts (Terry) of San Antonio, Elder James Alberts of San Antonio, Evangelist Shirley Flagg of Riverside California, Missionary Mary Parks, Barbara Mercer (Steve), Administrative Asst. Mishell Alberts Green (Darrell), all of Austin. Aunts: District Missionary Shirley Brown, Missionary Lillie Lackey. Uncles: Superintendent Curtis Burns, Elder Delover Burns. Special friend/brother: Dwight Jarmon, Michael Jarmon, and J W Jarmon, and a host of cousins that loved him dearly. View service live on Facebook at 12pm go to page: United International Holiness Fellowship

The family of Mitchell Wayne Alberts created this Life Tributes page to make it easy to share your memories.

Send flowers to the Alberts family.