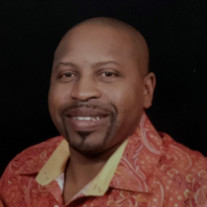 https://livestream.com/accounts/7325565/michaelstaples To everything there is a season, and a time to every purpose under the heaven: A time to be born, and a time to die. Ecclesiastes 3:1-2 Michael Charles Staples began his life’s journey on September 1, 1963 in Austin, TX as the oldest son of Ruth Staples and the late Horace Deshay. He was the oldest of three brothers whom he loved dearly. Michael accepted Christ at a young age and was baptized at Lone Star Baptist Church in Bastrop, TX. His grandmother, the late Odessa Staples, was pivotal in instilling the love of Christ into Michael along with the entire Staples Family. Michael was a proud graduate of Bastrop High School Class of 1982. During his high school years Michael played football and ran track. After graduation Michael moved to Austin, TX and worked as a store manager at Diamond Shamrock off of Airport. He worked many years in the IT field at IBM as a semiconductor and later at Selectron. He also did contract work until his kidneys began to fail him in 2018. As an adult, Michael placed membership at Shoreline in North Austin and was a faithful member until his health declined. Family and friends describe Michael as a kind-hearted, patient, loving man who enjoyed fishing and bike-riding. Michael took his “Uncle duties” seriously and rarely, if ever, missed a birthday party or sporting event. On November 5, 2020, in his 57th season of life, Michael surrendered his soul to Christ at St. David’s South Austin Medical Center in Austin, TX. Left to cherish his beautiful memories are: his loving mother, Ruth Staples of Bastrop, TX; his siblings, Pat (Stephanie) Deshay of Cedar Creek, TX; Kenneth (LaNelle) Staples of Bastrop, TX; his aunt, Majorie Staples of Austin, TX; his nieces Christy Fox (Carlyle) of Austin, TX; Christina Castillo (Matthew Felix, Jr. and Amayah Felix) of Bastrop, TX; his nephews Toma Williams, Jr. (Thomas Williams), Solomon Staples, and Seth Staples of Bastrop, TX. Michael also leaves behind a host of cousins, friends, and classmates.

https://livestream.com/accounts/7325565/michaelstaples To everything there is a season, and a time to every purpose under the heaven: A time to be born, and a time to die. Ecclesiastes 3:1-2 Michael Charles Staples began his life&#8217;s journey... View Obituary & Service Information

The family of Michael Charles Staples created this Life Tributes page to make it easy to share your memories.

Send flowers to the Staples family.