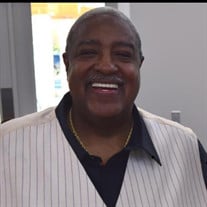 Our beloved Mike went to be with God on Monday, January 14, 2019. His transition was a gift. It is what we all long for; to be in the presence of our Savior. Kim Walker, Circle of Greatness Michael Joe Littleton nourished you with love. With a colossal personality and a smile contagious to all, he will be forever sketched in our hearts and minds. Born July 18, 1952 to James Littleton and Louisa Davis in Oklahoma City, OK, Mike was the second to youngest of five children. After graduating from Northeast High School, Mike cultivated his love for music as an organist, playing in the band, Phase 7. His early employment years included Montgomery Ward and Southwestern Bell. “Follow justice and justice along, so that you may live and possess the land the Lord your God is giving you”. ~~ Deuteronomy 16:20 Mike’s advocacy and passion for ensuring equity and fairness in the workforce led him to his career employment, where he served as Southern Area Director with Communications Workers of America, the largest communications and media labor union in the United States. In his leisure time, his sister Linda, remarks that, “Mike changed cars as often as she changed clothes”. Beginning his love for racing and classic cars in the 80’s, this infatuation and excitement for showcasing vehicles continued. Mike affectionately shared his collection of astonishing and phenomenal vehicles which permeated our hearts and drove (no pun intended) many of us to work car shows into our weekend schedules. One Lord, one faith, one baptism, ~~ Ephesians 4:5 At the young age of 10, Mike was baptized. From this age into young adulthood, Mike was a member of Ebenezer Baptist Church, Oklahoma City, Reverend Ezekiel Hill. As an older adult, he solidified his walk with God as he began to better understand, believe and trust God as his Savior. In 2002 Mike and Shaune joined Greater Mt. Zion, Austin, Texas under the pastoral guidance of Gaylon C. Clark, greatly enriching his walk with God. “You have captivated my heart, my sister, my bride; you have captivated my heart with one glance of your eyes, with one jewel of your necklace." ~~ Song of Solomon 4:9 Mike married his happily ever after, Shaune Delcine Williams, on March 3, 2001. Although no children were born to this union, Mike and Shaune are the joy in the eyes of many children and young adults. “Uncle Mike” is a term of endearment, respect and love. And Mike and Shaune’s, aka “Mr.& Mrs.”, love story and respect for one another has continued for more than 17 years. Behold, children are a heritage from the Lord, The fruit of the womb a reward. ~~ Psalms 127:3 Left to honor and remember his love is his wife, Shaune D. Littleton, 3 daughters, Detra Littleton-Williams (Kevin) of Round Rock, TX, Dana Littleton-Ball, Oklahoma City, OK Amber-Littleton Carter (Lee’Nell), Oklahoma City, OK, and 1 bonus daughter, Talina Beasley (Kenny), Oklahoma City, OK; 1 son, David Littleton, Oklahoma City, OK; 2 sisters, Iola “Sister” Hurte, Warr Acres, OK and Linda S. Spivey, DeSoto Texas; 3 bonus brothers, Michael Fleming (Clara), Jones, OK; James Williams (Sheila), Houston, Texas; Charles Jackson (Jacquetta), Waynesville, MO; 12 grandchildren, David Wright (Oklahoma City, OK), Brittany Littleton (Midwest City, OK), Carlos Hunter (Oklahoma City, OK), Willie Webb (Oklahoma City, OK), Deontae Doyle (Oklahoma City, OK), Terran Kendrick (Oklahoma City, OK), Shariyah Webb (Oklahoma City, OK), Takoda and Jonvea Ball (Oklahoma City, OK), Kevin Michael Williams aka “KJ” (Round Rock, TX), Layla and Leah Carter (Oklahoma City, OK), 2 bonus grandchildren, Whitley White-Body, (Sandford, Florida) and Jerry Edward Conerly, II (Pflugerville, TX), 2 great grandchildren, Aubri & Mekhi Littleton (Oklahoma City, OK) and a host of nieces, nephews, cousins and friends too massive to name. Mike was preceded in death by his parents, James and Louisa Littleton, a sister, Viola Mae Littleton and brother, Eddie Earl Daniels, Jr.

Our beloved Mike went to be with God on Monday, January 14, 2019. His transition was a gift. It is what we all long for; to be in the presence of our Savior. Kim Walker, Circle of Greatness Michael Joe Littleton nourished you with love.... View Obituary & Service Information

The family of Michael Joe Littleton created this Life Tributes page to make it easy to share your memories.

Send flowers to the Littleton family.