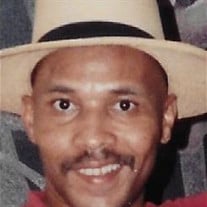 Mr. Michael Anthony Kenzie was born on October 18, 1956 to Mr. Mack Kenzie and Mrs. Shirley Canada Kenzie in Austin, TX, at Travis County, Bergstrom Air Force Base. Michael grew up in Austin, Texas where he received his education from Austin ISD and Del Valle ISD. He was employed as a chef and worked at different restaurants. Michael resided in several states when he was traveling with his mother during her lifetime. As Michael mother’s health declined he became her caregiver until her demise. Michael had a desire to have a family. On August 5, 1978 he married Jackie Johnson Michael had a spiritual touch and accepted Christ in his life and got baptized by Rev. Albert Stewart at Spirit of Liberty Baptist Church in New Orleans, Louisiana. Michael had a special love and passion for children. His passion gave him the desire to take care of his nieces, nephews, and a cousin. He was phenomenal with the memory of knowing everyone’s birthday. Michael was a sports fanatic. He knew all the history and stats for all the football and basketball teams. If you wanted updates he was the sportscaster. On December 29, 2018, Michael heard the voice of the Master say, “Well done my good and faithful servant.” He then made his life transition from labor to receive his reward at West Jefferson Hospital in New Orleans, Louisiana. He is preceded in death by his parents and three sisters. He leaves to cherish his memories, stepmother, Ms. Maggie G. Kenzie, two sisters Patricia, Davette, three brothers, Kelvin (Teresa), Malcolm (Amber), Mark, one stepsister Charlotte, three stepbrothers, Viodel (Yvonne), Elton (Marie), Kenneth (Robin), one aunt, Marnette Walker, one uncle, Columbus Samuel, nephews, Roderick, Nathaniel, nieces Nedra, Pecole, Eboni, Diamond, Emerald, Alexis, Maggie, great nephew London and a host of relatives and friends.

The family of Michael Anthony Kenzie created this Life Tributes page to make it easy to share your memories.

Send flowers to the Kenzie family.