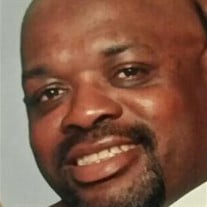 Beloved husband, father and friend, Mervin “Merv” J. Griffin, peacefully passed away Tuesday, December 18, 2018. He will be terribly missed by all who knew him, because to know him was to love him. Merv was born April 4, 1966 in New Orleans, Louisiana to the late August, Sr. and Shirley Griffin. He attended Phoenix High School and furthered his education at Huston-Tillotson College. While at HT, Merv was a dedicated athlete and participated on the school's baseball team under Coach James Wilson. Merv is the father of one daughter, Merissa Clark. In 1993, Merv married the love of his life, Ardtria Brown, and immediately embraced her son, Quincy, as his own. Merv and Ardtria remained in holy matrimony for 25 years until death parted them. Merv was preceded in death by his parents and two brothers, August, Jr. and Anthony. Merv was employed by the City of Austin for almost 30 years and was an integral part of the Parks and Recreation Department. Before his retirement earlier this year, Merv demonstrated his commitment to at-risk youth by creating a variety of programs that provided a safe environment and encouraged them to take their education seriously. He also coached many young boys and girls on softball and baseball teams, and a number of those players have gone on to succeed in professional sports leagues and other careers. Merv was not only dedicated to youth. He had a heart for all those in need. He was known to leave food and clothing near doorsteps where they could be found by those who needed them. At one point, he opened the showers at the rec center for homeless neighbors to use, even though it was against the rules. Merv also enjoyed assisting and providing companionship for elderly citizens who participated in the recreation center events. Merv's passions were his family and friends, and he was a huge fan of Louisiana State University and the New Orleans Saints. Merv is survived by his wife Ardtria, son Quincy (Maya), daughter Merissa, two brothers, Wilbert, Sr. and Eric Griffin (Jo Ann), two sisters, Sheila Thomas (Allen) and Margaret Duplessis, three uncles, two aunts and a host of cousins, nieces nephews and a set of very close friends.

The family of Mervin J. "Merv" Griffin created this Life Tributes page to make it easy to share your memories.

Send flowers to the Griffin family.