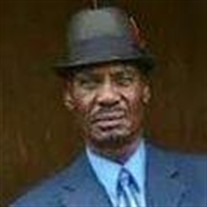 Melvin Lee Demps, Sr. was born on May 8, 1940 to Ruthie Tanksley Demps and Wesley Demps in Hutto, Texas. He gave his life to Christ at an early age and was a minister of South Side Church of Christ in Taylor, Texas. His early childhood was... View Obituary & Service Information

The family of Melvin Lee (Goat) Demps created this Life Tributes page to make it easy to share your memories.

Send flowers to the Demps family.