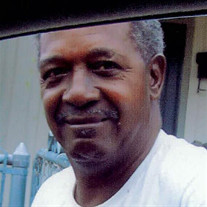 Mr. Maurice Hawkins was born December 9, 1936 in Austin Texas, to the late Annie Mae Bunton and Floyd Hawkins. In 1941 Maurice joined Grant Chapel AME Church under the pastoral leadership of Reverend W. D. Williams. Maurice served his church faithfully as an usher and trustee. He also served as the cook for many church functions, and was dedicated to helping whoever, wherever, and whenever he could. “Hawk” as he was affectionately called by many, retired from Austin Chemical/Pollock Papers in 1998 after 30+ years of service. After retirement he continued to be of service to his family and neighbors. He’d cook meals and take plates to his neighbors on College Row. Austin and Veronica, who lived next door loved his chicken, cats and conversation. Every Monday he would bring plates to his sister, Nell and his niece Charlene. He was an awesome cook and his signature dishes were his homemade chili and his macaroni and cheese. He loved being kind and helpful and always had a smile on his face. He was a good man and will be greatly missed by all who knew him. Uncle Maurice went home to be with the Lord February 2, 2019. He is survived by his sister, Arthur Nell Higgins, nieces Carlos King, Charlene Willie, Carolyn Williams, Cynthia Martin-Carnline (Michael), and Shauna Hawkins, nephews Michael Higgins and Eugene Dupree Hawkins. He is also survived by his grand nieces, Raynell Hardeman, Tonya Perkins, Kristi Willie, India George, Linda and Elena Higgins, grand nephews, Paul C. King, Brandon “Naomi” Moore, and Christopher Carnline, cousin Ruby Oakmon, and a host of other relatives and friends.

The family of MAURICE "HAWK" HAWKINS created this Life Tributes page to make it easy to share your memories.

Send flowers to the HAWKINS family.