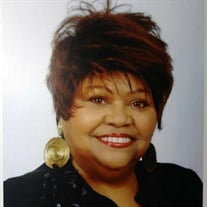 Dr. Maude Eleanor Ferguson, 75, peacefully departed this life at her home on Sunday, the 24th of March in Houston, Texas. She was born in San Francisco, California, and was raised in Iowa City, Iowa. She is the daughter of the late Dr. W. C. Ferguson and Mrs. Josie McDade Ferguson. Maude received her undergraduate degree in Business Administration from Prairie View A & M University. While a senior at “PV” she was elected “Miss Prairie View” a highly coveted honor at historically Black colleges. She resigned her position as Miss PV along with many other Prairie View student leaders in protest of the College administration’s hostility to student involvement in the Civil Rights Movements. Maude joined her fellow students on the picket lines and earned a place in the history of the college! She received her Master of Education degree (Counseling & Guidance) from Texas Southern University (1970) and her Doctor of Education degree from the University of Houston (1975). She also is a Licensed Professional Counselor (LPC) and an adjunct faculty member at several local universities. Dr. Ferguson has lived and worked in Houston since 1966. Dr. Ferguson is a retired senior administrator with a distinguished career in higher education. In over forty years at the Houston Community College System (HCCS) she has served in various positions from Upward Bound Director to Dean of Student (HCCS-Southeast College) to Associate Vice-Chancellor. She touched the lives of a great many people through her faith and through her professional service to the Houston Community College System, particularly as director of its Upward Bound Program for several decades. She was a highly sought-after grant writer whose skill laid the foundation for the HCCS Upward Bound and Talent Search programs which provided opportunity for thousands of first-generation minority students to attend college. She served as President of the Texas TRIO programs and was a highly coveted speaker, panelist and author with numerous published articles to her credit. Upon her retirement from HCCS, Dr. Ferguson was awarded the Chancellor’s Medallion for exemplary service to the institution. Dr. Maude has been highly recognized for her leadership, development and implementation of impacting programs from early childhood through secondary, college and graduate school levels, Dr. Ferguson has received a multitude of awards and honors. She was Chief Executive Officer of Helping Others Pursue Excellence, Inc. (H.O.P.E.). This community development corporation provided social service and educational programs to thousands of at-risk children, adolescents and families. Dr. Ferguson wrote grants for H.O.P.E. and affiliated programs, totaling over $8,000,000. Maude loved good food, enjoyed going to movies, playing cards with friends, and had a wonderful smile that could light up a room. Some of her favorites: Favorite Singing Group….The Whispers; Favorite Food…Shrimp Scampi; Favorite Movie….The Five Heartbeats; Favorite Hobby…Computer Games. Maude was preceded in death by her parents and two brothers. She is survived by her sister Dr. Elaine Ferguson as well as many nieces and nephews “Well Done, Thy Good and Faithful Servant…”

Dr. Maude Eleanor Ferguson, 75, peacefully departed this life at her home on Sunday, the 24th of March in Houston, Texas. She was born in San Francisco, California, and was raised in Iowa City, Iowa. She is the daughter of the late Dr. W.... View Obituary & Service Information

The family of Dr. Maude Ferguson created this Life Tributes page to make it easy to share your memories.

Send flowers to the Ferguson family.