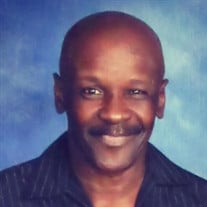 Marvan was the born to Marvan Walker Arnold, Sr. and Barbara D. Lee-Arnold on June 21, 1959. His dad was so proud that his son was born on Father’s Day that he called him Juniormeez. Marvan’s sunset was on Saturday, January 13, 2018, Seton Hospital at 3:15 PM. Marvan professed his faith in Christ at an early age, he was baptized by Pastor Lawrence V. Wicks at the Olivet Baptist Church, where he remained a member until his death. He was placed on the Sick and Shut-In List for several years after battling with Leukemia and three strokes. Before his death Marvan was functioning independently, even with his health challenges. He fought a good fight with faith! Marvan woke up each morning at 4:30 AM to talk to his sister Debbie and ask, “What does Jesus have to say today?” and wanted to hear the Word and pray, then afterwards would say “Thank you Jesus!” Marvan left this world quietly with a peaceful aura. Marvan received his education in the Austin Independent School District where he attended LL Campbell Elementary, Bedichek Junior High, and SF Austin High School; he ran track and played football. While at Bedichek in 1973 Marvan made the only touchdown for the school for that season, making an honorable announcement in the Austin American Statesmen Newspaper. At Austin High School he received medals in track and field for the 880 and 100 yard dash. Marvan loved drawing and making art pieces with whatever he had; he could make something out of nothing. Marvan attended Nixon-Clay Business College majoring in Drafting. He worked for many years for his step-father Vernest Johnson’s company; Johnson Home Improvements. Marvan was the jokester of the family, he would break out in a song without notice, especially singing songs to his nieces such as, “Sparkle In Your Eyes” and “Pretty Brown Eyes” or some other tune about beauty, but then go uncut to his nephews. He bonded with his brothers, sons and nephews on his terms, and openly expressed his love for his mother, sisters, and nieces, he was their biggest fan; always giving compliments. Marvan was not a good liar, before he told a lie he would laugh, and all would know he was lying. He had the sincerest smile and made a joke about everything. When he called you, he had his own agenda and would quickly cut off the conversation with “OK, I love you, bye.” One of his favorite quotes was “Thank you Jesus!” Marvan was a gentle soul, very impatient, but a humorous guy. All who met him fell in love with him and his humor. Marvan always said “I am the last of the dying breed.” His father Marvan Arnold, Sr., two brothers Cleveland Rueben Arnold, Sr. and Christopher Keith Arnold, his sister Sheryl Lynn “Shea” Arnold-Love, and step-father Vernest Johnson preceded him in death. He leaves to mourn four sons, Marvan Walker Arnold, III, Terrance Bernard Arnold (Detra), Desmond Denmon, and Kendall Lamont Denmon-Arnold (Chelsey), all of Austin, TX; two granddaughters, Ayanna Samoro Arnold and Aisha Irie Arnold, and one grandson Artayen Marvan Arnold. He also leaves to mourn his mother Barbara D. Johnson, four brothers Ronald B. Lee, George Arnold (Tomika) all of Austin, TX, John H. King (Cynthia) of Mesa, AZ, and Pastor Carl J. Jarmon (Mary) of Los Angeles, CA, four sisters, Debora “Debbie” D. Arnold-Mack of Round Rock, TX, Yu Vonda D. “Von” Arnold-Galloway (James Roderick), Veronica Arnold, and Margaret Renae Patton all of Austin, TX. Several nieces and nephews, great-nieces and a great-nephew, and extended in-laws, extended nieces and nephews, and a host of cousins and friends.

Marvan was the born to Marvan Walker Arnold, Sr. and Barbara D. Lee-Arnold on June 21, 1959. His dad was so proud that his son was born on Father&#8217;s Day that he called him Juniormeez. Marvan&#8217;s sunset was on Saturday, January 13,... View Obituary & Service Information

The family of Marvan Walker (GILMO) Arnold Jr created this Life Tributes page to make it easy to share your memories.

Marvan was the born to Marvan Walker Arnold, Sr. and Barbara...

Send flowers to the Arnold family.