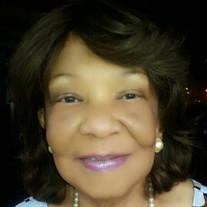 https://livestream.com/accounts/7325565/marthaferguson https://www.flipsnack.com/alcbf/martha-ferguson.html Martha B. Ferguson departed this life on August 27, 2021. She was born to Robert Jesse and Carrie Estella Black-Martin on August 11, 1937 in San Antonio, Texas. She was preceded in death by both parents and 2 brothers, Rev. Clifford Martin and Samuel Lee White, 1 sister, Claudia Mae Brazell. She is survived by 1 sister Frances L. White. At an early age Martha professed Christ by joining and being baptized in Mt. Zion First Baptist Church under the pastoral direction of Rev. Claude W. Black. Later becoming a member of Rising Star Baptist and Mt Zion Baptist Church, Austin, Texas. Martha was the mother of 7 children; 2 boys, Steve M. Ferguson Jr. and Michael D. Ferguson, five daughters, Cindy A. Ferguson, Karen D. Ferguson (Leandrew), Kathy D. Ferguson, Bridgette I. Ferguson, and Sheila R. Ferguson-Williams (Harry), plus 14 grand-children and 17 great-grandchildren, and many more family members and friends. Martha attended the public schools in Seguin and Houston, Texas, graduating from Phyllis Wheatly in 1955. She later attended Huston-Tillotson College. Graduating with a BA degree in Home Economics. While in college she met Steve M. Ferguson Sr. (deceased). Where they had 7 children together. She started out as a stay at home mother but as her children grew older, she wanted to pursue her dreams of becoming a Teacher of Elementary Education. As a result she taught at LL. Campbell, Scared Heart Catholic School, and Winn Elementary; Austin, Texas. Martha loved the LORD and brought her children up in the fear and admiration of GOD. She loved singing, playing, the piano and listening to music. She was an avid player of the game show Jeopardy and would challenge anyone to a game and would often time WIN!! She also had a love for people and was very out-going. She was also lovingly label as the second mother to many of our neighbors and friends. Martha’s affiliations include the Texas Teacher Associations, NAACP, and various church choirs.

https://livestream.com/accounts/7325565/marthaferguson https://www.flipsnack.com/alcbf/martha-ferguson.html Martha B. Ferguson departed this life on August 27, 2021. She was born to Robert Jesse and Carrie Estella Black-Martin on August 11,... View Obituary & Service Information

The family of Martha Bertha Ferguson created this Life Tributes page to make it easy to share your memories.

Send flowers to the Ferguson family.