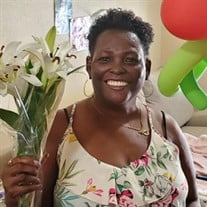 https://www.flipsnack.com/alcbf/hart.html Marilynn A. Hart, 61, of Terrell, Texas, died at 6:10pm, Saturday, May 8th, 2021 at Longmeadow Skilled Facility in Justin, Texas. She was born July 24th, 1959 at Parkland Hospital in Dallas, Texas to Jacob Polk and Mary Hart Barnett. She only married once and realized that it wasn’t for her. Surviving is her Son’s Patrick Hart (Tamesha Hart) of Keller, Texas, Robert Dunn (Terina Buentello) of Austin, Texas; 2 younger sisters, Hope Barnett Garcia (Bobbie) and Wendy Gonzales (Patrick); 1 younger brother, Ricky Hart; 2 nephews, Jasmond Williams, JaCory Curry; 3 nieces Britny Sampson, Peyton Jacobs (Bruce Jacobs), Bria Daye; 4 grandson’s, Bryant Young, Zachary Troxler, O’Neal Hart, Jayden Hart, (1) granddaughter Khalifa Watson; 2 great grandkids, Noah Young (9) & Norielle Young (3). Her father, mother, and brother, Jacob Polk, Mary Barnett and Stevie Barnett preceded her in death. Marilynn was a self-proclaimed “Hustler” and laid roots in Austin, Texas as a teenager. There she perfected her skills of cooking “Soul Food” and found that her smile opened doors for her. Her hobbies included talking about her boys, cooking, getting her nails and hair done, going to the movies (Action or Drama preferred), gambling, driving cars fast and making people smile. Her superpower was her ability to walk into any room and make everyone feel comfortable. When you were in her presence, you couldn’t help but to feed on her energy. There are few people that carried the energy of the Sun the way that she did. She was a devoted mother and took her role as provider, protector, educator and ambassador quite seriously. She preferred talking to older adults because she told us that’s who you learned your wisdom from but equally could make any kid feel good about themselves. If the word Love had a picture; it would look like her.

https://www.flipsnack.com/alcbf/hart.html Marilynn A. Hart, 61, of Terrell, Texas, died at 6:10pm, Saturday, May 8th, 2021 at Longmeadow Skilled Facility in Justin, Texas. She was born July 24th, 1959 at Parkland Hospital in Dallas, Texas to... View Obituary & Service Information

The family of Marilynn Annette Hart created this Life Tributes page to make it easy to share your memories.

Send flowers to the Hart family.