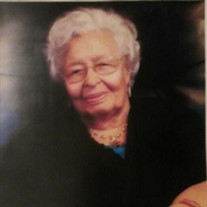 https://livestream.com/accounts/7325565/margarettapscott Margaret Ann (Johnson) Tapscott was born December 21, 1931 in Tuscumbia, Alabama to the union of Arthur C. Johnson and Lillie Mae Clark. She attended G.W. Trenholm School in Tusumbia, where she starred in basketball. She graduated from Trenholm in 1950. She then went to Tennessee State University in Nashville, Tennessee where she met and married the love of her life, Robert J. Tapscott. To this union were born two sons: Robert J. Tapscott, II (Sandra), Jonathan R. Tapscott (Yvonne) and one daughter, Jacqueline R. Tapscott McAfee. She moved to Houston, Texas in 1952, where she worked for Montgomery Ward and the U.S. Postal Service. She and her family moved to Austin, Texas where she continued to work for Montgomery Ward until she retired in 1992 after 27 years of service. She loved high school sports, particularly basketball where she attended the state championships from 1968-2013. She shared this love with her family and friends as if she was participating. She looked forward to every Fourth of July for the annual Tapscott family reunion in Prairie View, Texas and later Houston, Texas, She was an active member of Wesley United Methodist Church as a Communion Steward and the United Methodist Women and in her community as a member of the Sigma Gamma Rho Sorority, Inc. Southwest Region Philos. Margaret was preceded in death by her loving husband, Robert J. Tapscott, her parents, Arthur C. Johnson and Lillie Mae Clark, her brother, Russell B. Clark and his wife Gloria. She is survived by her three children, two Godsons, Gregory Maxwell (Sherry) and Shannon Lewis, 10 grandchildren, 22 great grandchildren and 3 great-great grandchildren and a host of nieces, nephews and friends.

The family of Margaret Tapscott created this Life Tributes page to make it easy to share your memories.

Send flowers to the Tapscott family.